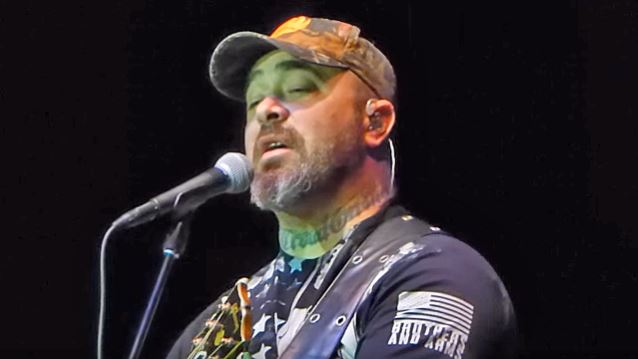 STAIND frontman Aaron Lewis, a conservative Republican who calls himself a patriot in his Twitter bio, has told Billboard.com that he is paying close attention to the U.S. presidential primary campaigns. Lewis voted for Texas senator Ted Cruz — "the most constitutionally driven candidate on the docket" — in the Massachusetts primary, but he says he will support whoever gets the nomination from the Republican Party in the general election.

"Listen, I like the fact Donald Trump has come in and shaken things up and said a whole lot of things the establishment doesn't want to hear him say and the people did want to hear him say," Lewis said. "But at the same time, there's an expectation for somebody being presidential in nature, and he disappoints me with the bickering and the name-calling. It's just not very presidential behavior. But I would certainly vote for him if he becomes the candidate."

"Why does all the money from the state go to Washington, D.C., first before it comes back to the state? There are so many things broken about a system that was so amazing and so perfect on conception, that the creation of this country and the document that created it made this country the most sought after place in the world for many, many years."

Lewis added: "Somewhere along the way as a society we lost all the values that made this country great to begin with. (Like) going out and working for a dollar and working hard to earn your keep and expecting nothing from anyone, expecting no hand-outs, knowing that nothing in life is free. All these things have just vanished. I mean, look at MTV.

"They should all be burned at the stake for what they're doing, for the programming they're putting forward for our children to watch. There are so many things that have been allowed to just get so far out of control that the only way to fix it is to go back to the design.

"This whole entitlement society that we live in today. Everybody thinks that they're supposed to get something. Where did that come from? I don't understand. I don't understand how people today can think that somebody's going to provide for them."

Asked if his politics have pretty much always been the same or if they have evolved with time, and if so, if there were any particular incidents that changed his worldview, Lewis said: "I guess looking back as a teenager I was always kind of rebellious, anti-government (and) anti-establishment like so many punk-ass kids, I was no different.

"I've had jobs that I was paid under the table for, just like everybody has. But, I have a family, I have a career. I work very, very hard for my money, and I sacrifice a lot to earn a living, to keep food on my table and to keep a roof over my family's head.

He continued: "For someone who chooses to do nothing with their life, to be able to participate in the fruits of my labor is completely unacceptable to me. It's one thing if I choose to involve you into the fruits of my labor, whether it's because you are utilizing this wonderful system of capitalism and you've figured a way to create a job within what it is that I'm doing or whether I charitably invite you in, that's my choice and it's the choice of every free citizen in these United States.

"Nobody is going to tell me that the government knows better as to what to do with my money than I do. I do so much without being told to do it, I don't need to be told to provide for a bunch of people that wouldn't get off their ass and provide for themselves. That would be like being in high school and studying your ass off to make sure that you got an A in a test and then the guy who did nothing but party all week and blew off studying gets an F and you both get Cs because he gets to share in your hard work."

Aaron added: "It's not right. Life isn't fair. It's not all roses. It's hard work. Life is commitment; life is diligence."

Lewis also addressed the fact that his name has frequently been brought up as being tied to the Tea Party movement. He said: "The funny thing with that is because I make mention to the Gadsden flag in 'Country Boy', everybody just assumed I'm a Tea Party member.

"Y'know that Gadsden flag stood for something. It was in defiance of England and in defiance of those who chose to keep us underneath their thumb. I had 'Don't Tread on Me' tattooed across my throat before the Tea Party ever jumped on the whole Gadsden flag thing."

"On my bicep I have a big waving American flag that has encrypted over the top of it 'Proudly made in the U.S.A.' I don't think it's political. I love my country. It's patriotic."