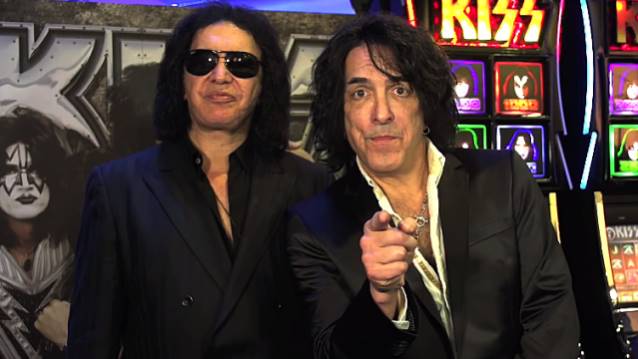 STANLEY And SIMMONS: No Version Of KISS Will Perform At ROCK AND ROLL HALL OF FAME

Less than two days after former KISS guitarist Ace Frehleyrevealed that the original lineup of the band will not reunite to perform at the Rock And Roll Hall Of Fame induction ceremony in April, KISS leaders Paul Stanley and Gene Simmons have announced that no version of the group will play at the event.

Stanley and Simmons' official statement on the matter reads as follows:

"To all our fans in regards to the Rock And Roll Hall Of Fame:

"Out of respect, Ace and Peter's [Criss', drums] recent statements demand a quick response to you, our fans.

"Our intention was to celebrate the entire history of KISS and give credit to all members, including present longtime present members Tommy Thayer and Eric Singer, and additionally Bruce Kulick and Eric Carr, all who have made this band what it is, regardless of the Rock And Roll Hall Of Fame's point of view.

"Although KISS has moved forward far longer without them, Ace and Peter are at the very foundation of what we have built and this would all be impossible had they not been a part of it in the beginning.

"It is over 13 years since the original lineup has played together in makeup and we believe the memory of those times would not be enhanced. Contrary to claims made through the media, we have never refused to play with Ace and Peter.

"We have spent 40 years dedicated to building KISS without quitting or wavering as the band has moved forward with huge tours and platinum albums through different important lineups for forty years, to this day.

"This is understandably an emotional situation where there is no way to please everyone.

"To bring this to a quick end, we have decided not to play in any lineup and we will focus our attention on celebrating our induction into the Rock And Roll Hall Of Fame.

"We are excited and are looking forward to seeing you all on the KISS 40th-anniversary worldwide tour."

In a 2012 interview with Revolver magazine, Stanley and Gene Simmons were asked if they are bothered when people complain about Frehley and Criss not being in the KISS anymore. "Almost nobody does," Simmons replied.

"When you have 3-year-old and 5-year-old fans showing up to our concerts — or even 30-year-old fans — they don't know about Ace and Peter. I mean, next year is going to be our 40th year. We've been touring longer than most of the people who come see us live have been alive.

"Who's Ace and Peter?

"By the way, bless 'em both — what I just said doesn't mean that Ace and Peter weren't every bit as important as Paul and myself in the beginning of the band, but not everybody has the same DNA. Some people shouldn't be in a marathon race. They're just not designed for it. Some people are good for short runs."

"Eric's been in and out of the band for 20-some-odd years. And Tommy, too," added Stanley.

"The only people who would complain, I think, are people who don't really follow the band at this point.

"The myth that sometimes surrounds the original lineup is purely myth. Some of it was of our own doing. The whole projecting the idea that it was four guys giving equally. Quite honestly, it was kind of our take on THE BEATLES: four guys that spend all their time together and run down the street jumping up in the air. But it's not a reality. And maybe part of the problem was that some of the guys in the band really bought into believing it.

"The band always had two people who were leading it and the idea that anybody is entitled to having songs on an album is crazy."

On the topic of why they think they felt like they had to project those myths in the early days, Stanley said, "Well, l think there was a certain amount of truth to it. Just in the sense of you have a band and there's a certain camaraderie, but there's also a sensitivity factor to people feeling minimized or left out. So to avoid that, we sometimes gave people more than their due.

"In those days, Gene and I shared our songwriting l with those guys because we didn't ever want it to be an issue that anybody was making more money than the other and therefore wanting songs on the album. Well. it obviously didn't work. [laughs] The only thing l did was give money away. [laughs] But all that being said, I've said it before. I'll say it again — we couldn't be here today without what Ace and Peter did in the beginning, and we couldn't be here today if they were still in the band."