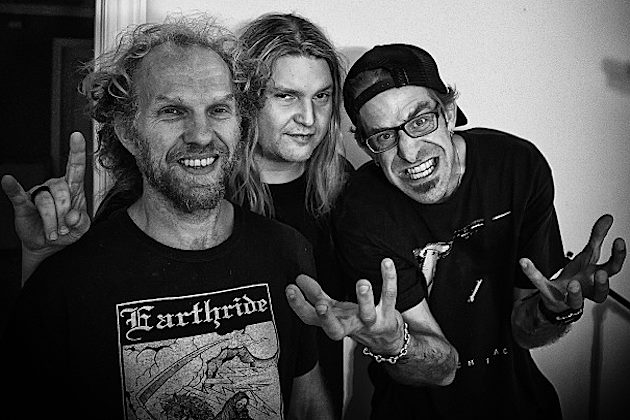 TEENAGE TIME KILLER, the new project featuring singer/drummer Reed Mullin of hardcore punk veterans CORROSION OF CONFORMITY alongside a number of well-known musicians from the metal and hardcore scenes, has inked a deal with Rise Records for the reiease its debuit album.

The instrumental parts for the upcoming CD were recorded at Dave Grohl's (FOO FIGHTERS, NIRVANA) Studio 606 in Northridge, California on the famous Sound City mixing board, which was the central focus of Grohl's acclaimed "Sound City: Real To Reel" documentary. The effort was mastered by Bill Stevenson (THE DESCENDENTS, BLACK FLAG).

TEENAGE TIME KILLER, which is named after a RUDIMENTARY PENI, will feature contributions from the following musicians, among others:

Asked if there are any plans for TEENAGE TIME KILLER to go on the road in support of the upcoming CD, Mullin told INDY Week: "Touring, I don't know. Dave Grohl's folks — his management and marketing people — are going to help us do all that with the thing. We recorded about 98 percent of it at his studio. They were talking about — since there's so many people from so many different bands — maybe do something like '[Jimmy] Kimmel [Live!]' and have three or four different singers come out at one time, like Jello and Lee Ving, maybe Randy from LAMB OF GOD, something like that. All the songs are real short, so we could do, easily, four songs and not go over. But you know, we'd have Brian Baker come out and play guitar, Pat Smear play bass or guitar or whatever. It's pretty star-studded."

He added: "It sounds really organic. It sounds like we — the people that we associated with for the different songs — wrote the songs together."

Back in May 2013, Blythe posted an Instagram photo of him with Dean and Mullin in the studio and described his contribution to TEENAGE TIME KILLER, a track called "Hung Out To Dry", as "old-school C.O.C.-style thrash punk."