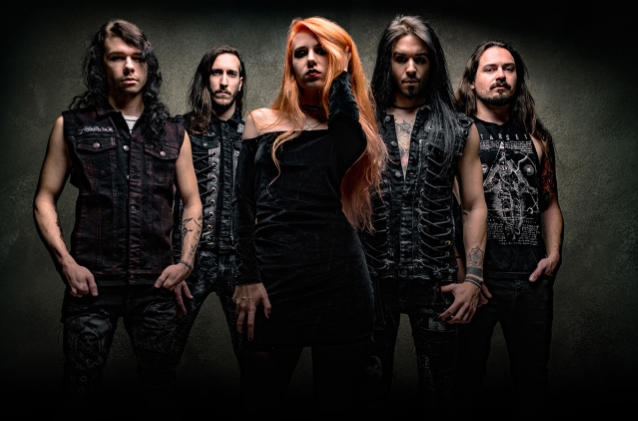 STARKILL's new single, "Until We Fall", is available now via all digital retailers, along with a music video directed by Davide Cilloni (EPICA), which can be viewed below.

"Our new songs are the first we've put together where Sarah Lynn Collier was a full-time member before we started writing, so we were able to fully utilize her vocals, which is evident in our first single 'Until We Fall'," stated guitarist Parker Jameson. He added: "As is usually the theme in STARKILL, it's not like anything we've done before."

The writing and recording of "Until We Fall" was a cathartic process for the band. Lyrically, the song addresses the band's personal experiences with the struggles of being in the music industry and being able to cut free and break loose from the clutches of it. A fitting theme, being this is STARKILL's first fully independent release.

Director/animator Davide Cilloni's take on the song's lyrical concept shows the band as a crew of space pirates leading a revolt with fellow inmates in a space prison. "Being big fans of DETHKLOK, anime, and having a sci-fi-esque name like STARKILL, we figured it was just time to embrace a more epic type of music video," explained Jameson.

"Until We Fall" was engineered and mixed by Jameson, with additional mixing by Chuck Macak (THE FALL OF TROY, BORN OF OSIRIS). The track was mastered by Troy Glessner (DISTURBED, DEVIN TOWNSEND).