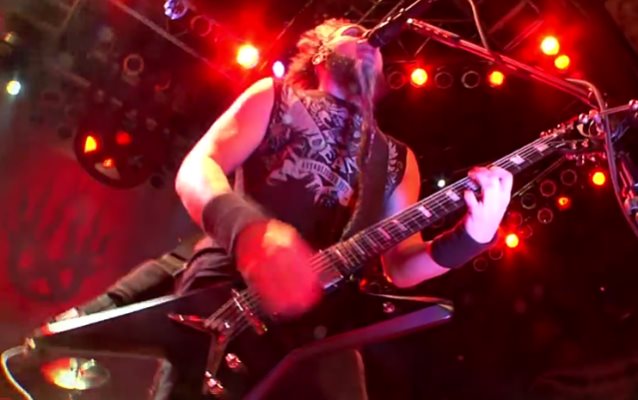 Wayne Static of STATIC-X was interviewed on a recent edition of "The Five Count" radio show in Mankato, Minnesota. You can now listen to the chat in the YouTube clip below.

"Wisconsin Death Trip" came out on March 23, 1999 and featured such future STATIC-X classics as "Push It", "I'm With Stupid" and "Bled For Days". Though the album only climbed as high as No. 107 on The Billboard 200 chart, it did top the Heatseekers chart that same year.

Said Wayne about the trek: "I can't believe it's been almost 15 years to the day since 'Wisconsin Death Trip' was released, and in 1999 I never could have predicted all the love from all you Evil Disco followers for so many years.

"This tour is for all the hardcores as a celebration of what we have accomplished together. 15 years later, and I'm still kicking, thanks to all of you!

"We are [playing] the CD top to bottom and it's… a blast to pull out some of the old tracks that I have not performed live in years, some that have never been played live, and, of course, all the songs that have become staples of my show."

In a recent interview with the LA Music Blog, Static stated about his new solo band: "I had a few changes in 2012. One of my bass players, Brent [Ashley] — he left. Then Frankie came in, then Frankie left. I've got this guy Andrew Cole right now, who's awesome. He plays in a band right now in L.A. with the COAL CHAMBER guys, with Meegs and Mikey… And then Ashes, he's been my guitar player since day one, so he's my guy. And then drums, I'm bringing back Bevan Davies, who did the last two STATIC-X tours. He lives in Atlanta. I've already toured with him, so I'm not worried about him. He's really solid. He's got that real old-school STATIC-X feel, ya know? The first STATIC-X drummer, Kenny Lacey, had this basic kind of style and that's what Bevan does — just real solid and basic. It's really cool playing the old shit with him because he really nails it."

Wayne also spoke about playing smaller clubs on his current run, saying: "Ya know, we're starting slow, and I don't have the STATIC-X name anymore. I made a deal with Tony [Campos], my old bass player, last year. He's the only legal STATIC-X member besides me. I paid him a bunch of money [m 2012] to use the name, and he's just a greedy motherfucker, man. He just hates me to death. He's trying to gouge the shit out of me. I made him an offer to give him 25 percent of my net profits and he refused it. He wants this outrageous number. [laughs] He wants more money than I make in a year, and he's just doing it on purpose because he hates me for whatever reason. But he doesn't want to play in STATIC-X, though. I gave him the opportunity, like, 'Do you want to tour with us?' He's like, 'No.' Okay, well, 'Will you let me use the name?' 'No.' [laughs] He's basically just telling me, like, 'Fuck you.' Ya know? [laughs] I'm like well, at least my name is Wayne Static and people know who I am. I'm not just some jack-off bass player that used to play in a band called STATIC-X. I'm like, 'Fuck you,' ya know? I'm still playing in a band called WAYNE STATIC. It's a little bit smaller because not everyone knows the name WAYNE STATIC, and everyone knows the name STATIC-X, but we're gonna build it up. I basically made the choice that STATIC-X is done, unless Tony changes his mind at some point, which I doubt he will. We're just going to build on STATIC-X. The funny thing is that it's still the same guys that played with STATIC-X last year, the same songs basically…we just can't call it STATIC-X."