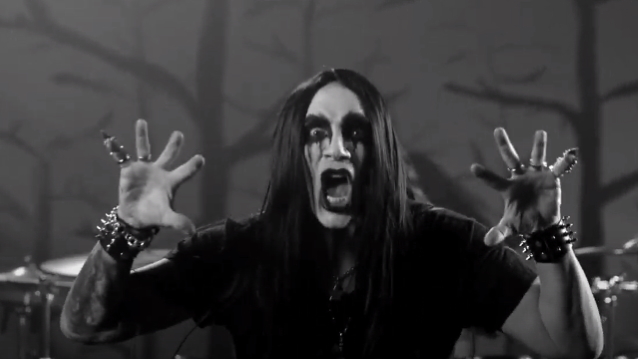 There are always a lot of questions asked about California rock legends and effects pedal entrepreneurs STEEL PANTHER. Are they sure heavy metal rules? Do they really play their instruments? Could they be my father? While the answer to all of these questions is "yes," another question is what would have happened if STEEL PANTHER chose a different genre of music? That question is answered in the band's music video for their newest single "Let's Get High Tonight", taken from STEEL PANTHER's latest album "Heavy Metal Rules". The Frankie Nasso-directed clip showcases Michael Starr, Satchel, Lexxi Foxx and Stix Zadinia as a black metal band, a Spanish mariachi band, a boy band, a Baroque classical quartet, and a country/western band. Ultimately, the spandex wearing/Aqua-net loving superheroes made the right choice on music styles, but could use some help picking chauffeurs. You will have to watch the video to see how it ends.

STEEL PANTHER is currently sitting home practicing social distancing and self-gratification thanks to the coronavirus. The band is planning to return to the road during some month that will kick off in some city with some other bands once the world returns to normal. In the meantime, they are working on ideas for all sorts of new things to better the lives of everyone affected by the pandemic. They recently launched an initiative to help out-of-work strippers affected by the global pandemic by posting about their performances on their socials with links for people to virtually "make it rain" from the comforts of their couches. They are also working on a 24-hour digital stream of adoptable pets as part of their Gods Of Pussy Animal Rescue Activation.

"Heavy Metal Rules" was released last September. The disc, which is described in a press release as a "heavy metal version of a self-help manual and ultimate party album combined," was once again produced by Jay Ruston, who collaborated with the band on all of its previous recordings, including 2017's "Lower The Bar".