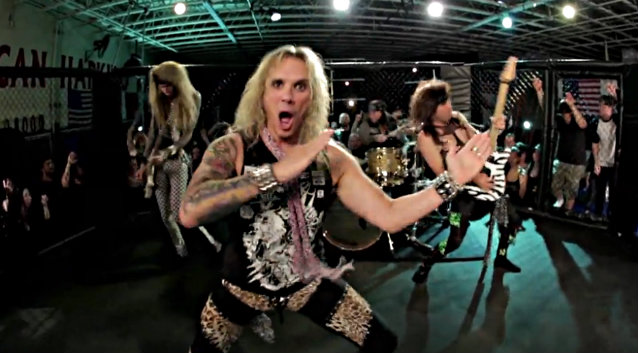 "Pussywhipped", the new video from glam-metal jokesters STEEL PANTHER, can be seen below. The clip was directed by Dean Cameron, who previously worked with the band on the "Fat Girl" clip.

STEEL PANTHER is currently supporting JUDAS PRIEST on a North American tour. The trek kicked off on October 1 in Rochester, New York and will run through mid-November, wrapping up in Tacoma, Washington. The tour will make stops in major markets, including Brooklyn, Detroit, Baltimore and Los Angeles.

"I cannot believe that we are touring with JUDAS PRIEST. One of the most iconic heavy-metal bands of all time! We are going to have THE most amazing tour this fall," exclaimed vocalist Michael Starr. "If you don't buy a ticket for the show, you must be a Justin Bieber fan. Death to all but metal!"