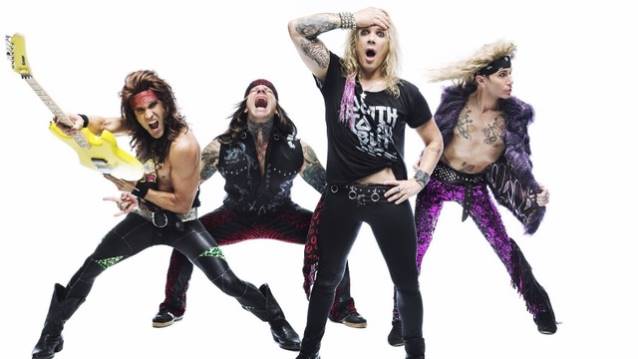 Los Angeles glam-metal jokesters STEEL PANTHER will release a new acoustic album in February. The effort was recorded this past October at Swing House Rehearsal & Recording in Atwater Village, California.

STEEL PANTHER singer Michael Starr told "Another FN Podcast With Izzy Presley" about the forthcoming unplugged record: "It's gonna be accompanied with a DVD as well. We're gonna debut a few new tunes on this actual unplugged, and we're not gonna put out the new songs recorded [on a proper studio album]… We're gonna actually record them live and release 'em."

Although the STEEL PANTHER acoustic album already has a title, Starr declined to reveal it during an interview with South Detroit SoundHouse. He said (see video below): "The title is really cool. We fought tooth and nail with the record label regarding the title, 'cause they wanted us to change it. And I said, 'No. I ain't changing nothing.' And we didn't. So you're gonna love the title. It's fucking sexy."

STEEL PANTHER is coming back to Las Vegas for three nights in January. They will perform at the House Of Blues on January 8, January 15 and January 22.