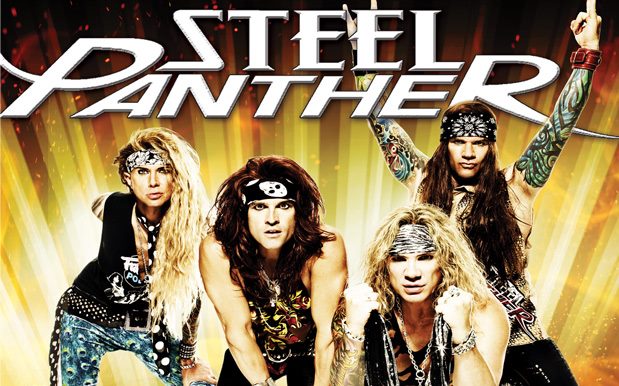 LA KISS announced that STEEL PANTHER, widely considered one of the hottest heavy-metal bands out of Hollywood since MÖTLEY CRÜE, GUNS N' ROSES and POISON ruled the Sunset Strip, will play a special halftime performance for the team's first-ever home game on Saturday, April 5 at the Honda Center in Anaheim.

The opening night of LA KISS will serve as STEEL PANTHER's official record release party for their new album, "All You Can Eat". As part of both of these first-ever events, STEEL PANTHER will unveil special performances before the game, at halftime and several times during the game on the new permanent end zone stage that will play home to other top performers throughout the LA KISS season.

Single-game tickets for the team's first home game are now available and can be purchased via Ticketmaster.com or the Honda Center Box Office.

"All You Can Eat", on April 1. The band is premiering the CD in a unique interactive experience that has just launched. The premiere is taking place here and features a television set that will broadcast all things STEEL PANTHER, including the complete album stream of "All You Can Eat".

With each change of the channel on the television set, fans will experience different content from the STEEL PANTHER world. The set will broadcast the latest STEEL PANTHER music videos, current episodes of SP TV and a few surprises as well. The experience will take fans deeper in to the lifestyle of STEEL PANTHER and is a must see for all Fanthers around the globe.