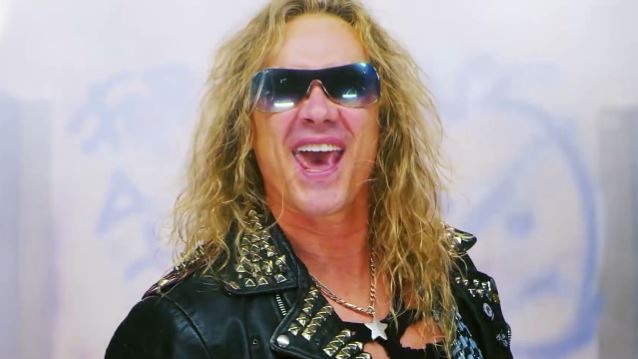 Journey Of A Frontman: What would you say are the best parts about being in STEEL PANTHER?

Michael Starr: I would say one of the cool things is we get free beer and shit, free Red Bull. And now that we're older, we get Diet Red Bull, sugar-free Red Bull. It has less calories. And then free drugs is pretty cool. You have to be careful when you take drugs from people for free, because some people don't like heavy metal and they like to give you drugs that will kill you. Lexxi [Foxx, bass] took what was supposed to be Oxycontin and I don't think it was, it was a roofie. He was out for two days. You've gotta be careful.

Journey Of A Frontman: Regarding a live show, what do you feel are the most important factors in being a frontman?

Michael Starr: I would say the most important, number one, top, double A, one, one, one would be charisma. For people that don't really understand how charisma relates to a lead singer, it's really simple. You have to be able to tell a story, look them in the eye, get them engaged in what you're talking about, get them engaged in what you're singing about, and you have to have the ability to make people feel like you care about what they think. And it's not easy. It takes a lot of work and it's definitely a gift from Heaven, I think. It's hard, people expect it. I'll be walking on a beach and people expect me to engage them and I don't have it, I'm off right now. I'm just walking and doing this interview. It's a burden, dude. It's a burden being wonderful.

Journey Of A Frontman: Recently you did some shows with FOZZY and bonded with them. They're very high on you guys now.

Michael Starr: FOZZY, fuck yeah! Great band. Great dudes. We befriended each other in Australia, we were on tour together. It was FOZZY, then BUCKCHERRY, then STEEL PANTHER. It was a great tour. We got to know everybody. They played me some of their music from the new upcoming record and I asked if I could sing on a song. They said yes, which was really cool. So I sang on a song called "Tonight". It was great. And one thing I learned from Chris [Jericho] is always get grilled chicken backstage. I went backstage and I saw him having a plate full of grilled chicken breast and I was like, "Where the fuck'd you get that?" He's, like, "Ah, man, I put it on my rider. Otherwise they're gonna give me fucking deli meat, which is full of salt and I get bloated before the show. I don't look as good as I could." Damn! So I stole that. Now we get grilled chicken backstage.

Journey Of A Frontman: And I'm hearing about a TV show in the works for STEEL PANTHER.

Michael Starr: Oh, dude, it's so laboring, dealing with this fucking TV show. Getting a record deal, I thought that was hard. It's like finding a golden nugget the size of your balls. It's really, really hard to get a record deal, but it's even harder to procure a TV deal. There's so much going on with it. So where we're at with it, we are in negotiations to start shooting. That's where we're at. We've been in negotiations to start shooting episodes for about a year now. It's like dating a retarded chick — are we gonna fuck or not? Either fuck or get out of bed. Our show's gonna be based on what people don't know about STEEL PANTHER because there's a lot of awareness that could be raised about STEEL PANTHER. And I think people will be engaged when they get a chance to see what we're all about. People hear about us, they know our names, and this way, they can see what's going on in Europe, what's going on in Australia, see how we actually live our life. I think it'll be pretty rad. We've spent Monday nights on the strip for fourteen years and that's the longest-running heavy metal show in the history of Hollywood. So we were thinking that we deserve a star on the Hollywood Walk Of Fame. Part of the journey with STEEL PANTHER will be us getting that star. Gotta fight the cause!

Journey Of A Frontman: We discussed FOZZY, but you're also good friends with Corey Taylor [SLIPKNOT, STONE SOUR]. How did that relationship begin?

Michael Starr: That started back in '99/2000. We used to play The Viper Room, Sunset Strip, every Monday. Monday nights are a great night for people that are in the industry to go out because there's really nothing going on. So any band that was coming through touring or recording, they all would come to our show. Corey was a dude who would come to our show all the time. This is when he had long hair to his shoulders, he looked like a fuckin' ragdoll. Then he'd get up and he'd just jam. It'd be weird, I'd hear, "Corey Taylor from SLIPKNOT's enjoying it! Get him up to jam!" We'd get him on stage, "Dude, what do you wanna jam?" "'Nothin' But A Good Time' by POISON!" What?! We'd go into the song, fuckin' killed it. That guy is a great singer and we became great friends, we'd hang out a lot and do that. And we got to know each other, once we became a touring band, we'd be on the same festivals and hang out. He had his wedding reception at our show in Vegas.

Read the entire interview at Journey Of A Frontman.