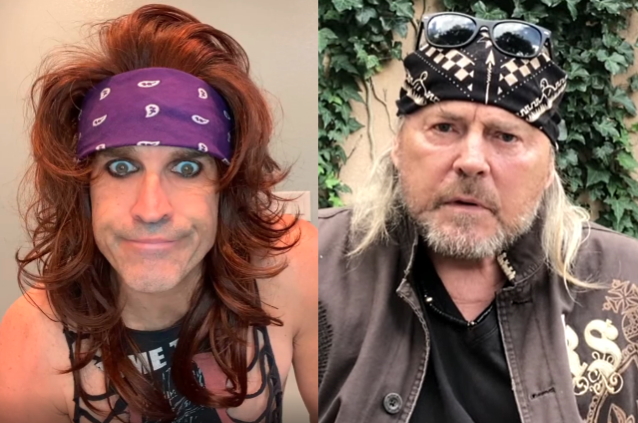 During an appearance on the latest episode of the "2020'd" podcast, STEEL PANTHER guitarist Satchel recalled a particularly amusing encounter with legendary DOKKEN frontman Don Dokken when both bands performed at the M3 Rock Festival in Maryland. "We had never played there before," Satchel said. "And I was wandering around and I found the place where all the bands go to eat. I wish it was a Pizza Hut; the food wasn't that good. I went and got some food, and I was looking for a place to sit down. There was a bunch of people — there was a bunch of bands playing there — so it was more crowded than a Pizza Hut. I was looking for somebody in my band so I could sit down next to somebody and not feel uncomfortable. And I saw [STEEL PANTHER singer] Michael Starr — he was across the way — and I was, like, 'Oh, shit, Michael's sitting next to some homeless guy who's losing his hair and he's got fucked up teeth and shit.' I was, like, 'Well, fuck it. I'm gonna sit next to Michael and the homeless guy.' And I went and sat down, and I was, like, 'Oh shit. That's not a homeless guy. That's fucking Don Dokken.' And I sat down next to Don Dokken and Michael. And Don was so talkative. He was really a nice guy. He was talking about how he likes to plant flowers in his backyard or something. I think he was full of shit… All I could think of, as I was trying to eat… First of all, I was thinking about two things — that Don had a piece of barbecued chicken hanging from his chin. And he didn't know it. I was, like, 'When's that gonna fall off?' And the other thing I was thinking was, 'My God, I hope I don't look like Don when I'm his age.' And I was, like, 'Fuck, that's only in, like, six months.'"