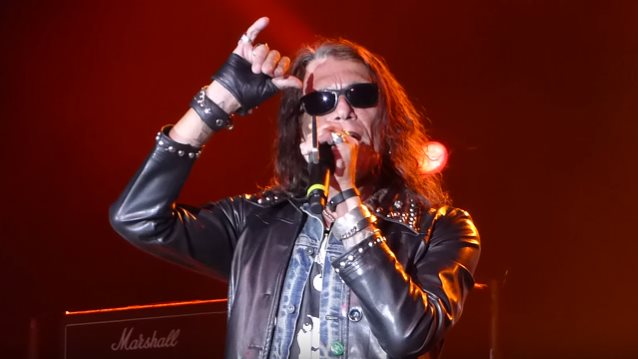 STEPHEN PEARCY: Next RATT Album Will Be 'Quite A Lot Different' From 'Infestation'

Stephen Pearcy says that RATT's upcoming album will be "quite a lot different" from the band's last disc, "Infestation".

Released in 2010, "Infestation", featured Robbie Crane on bass instead of Juan Croucier, who rejoined the group in 2012. After putting the band on hold for a few years, Juan and two other members of RATT's classic lineup — Pearcy and guitarist Warren DeMartini — became embroiled in a highly publicized legal battle with drummer Bobby Blotzer over the rights to the RATT name, with the trio finally emerging victorious several months ago.

Since 2015, Blotzer had been playing shows under the name RATT with a lineup in which he is the sole member from the band's '80s heyday. He pitted himself against Croucier, Pearcy and DeMartini, who reunited last October for a surprise performance on a Monsters Of Rock cruise. The trio has since played a series of RATT shows, including high-profile sets at Maryland's M3 Rock festival and Oklahoma's Rocklahoma, and has issued cease-and-desist letters to concert promoters in an attempt to block the Blotzer version of RATT from performing under that name.

During an August 17 appearance on the "Trunk Nation" show on SiriusXM channel Volume (106),Pearcy was asked how the chemistry has been in the reunited RATT since the band's relaunch almost a year ago. "It's good," he said. "It's getting your feet wet. It's the same bicycle; you just learn to ride it again. We're having a good time. It's just trying to do the right shows to re-establish the footing. So we [stopped playing live] — Sturgis [in South Dakota] was our last show — and we're gearing up for the next year. We want some time to do it — to do it properly. We're talking about [making] a [new] record. We'll see what happens. It's been many years [since we released something new]…. We're regrouping and preparing for next year, which is gonna take time, because, like I said, there's a record we're talking about. And we'll see what happens. But we have to regroup and prepare for the next assault."

Asked if he thinks it was important for RATT to start playing shows again in order to let people know that this version of the band was out there, Pearcy said: "To a small extent. The people know who we are. But we did wanna go out and do some festivals — the big shows — and then the other shows just started coming at us. So we just try to keep things in perspective. But it's all good. It's copacetic, man."

According to Stephen, the reaction from the RATT fans to the band's live shows has been "great. People are having a good time. We're very tight — we're tight out there," he said. "You don't get Juan and myself and Warren — the nucleus [of the band] — and not be tight. It could be loosely tight sometimes, but we're having fun. Some songs just hit it off — it's a good thing."

Pearcy said that he still felt a strong desire to keep recording full-length albums even though fans appear to be less interested in hearing new music from veteran rock artists. "I just make records," he explained. "I have my own record label for a reason. I just love making records. A record, whether people buy it or not, it's still this story. Otherwise, we can whip out singles all day long. Warren and I have been writing, so we can do it all day, every day. But a record and a concept is, to me, still important."

Pearcy also confirmed that Croucier will be heavily involved in the writing process for RATT's next album, marking the bassist's first appearance on a RATT LP since 1990's "Detonator". And although the singer was reasonably happy with how "Infestation" turned out, Stephen said that "with Juan back in the mix writing and stuff, the next record will be quite a lot different."

Joining Pearcy, Croucier and DeMartini in RATT's current lineup are former QUIET RIOT guitarist Carlos Cavazo, who played on "Infestation", and drummer Jimmy DeGrasso, who previously played with Y&T, WHITE LION and MEGADETH, among others.