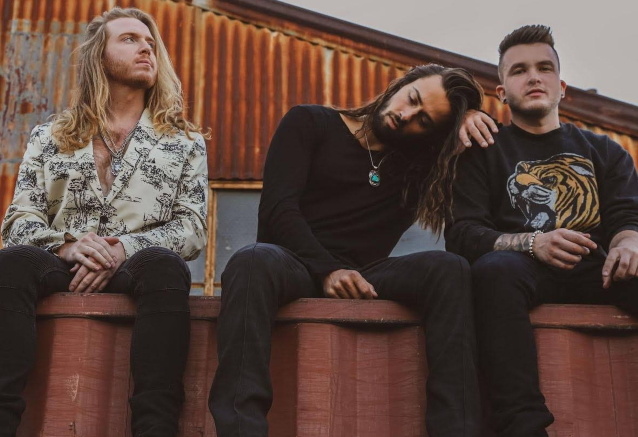 LEVARA and Mascot Records present "Chameleon", the second song to be revealed from the band's debut studio album coming in 2021. The recording features a special contribution from former JOURNEY singer Steve Perry on background and group vocals, while the accompanying music video presents more than 40 friends of the band appearing singing the song simply expressing themselves in a natural sense. Amongst those appearing are tastemaker Matt Pinfield, boxer Victor Ortiz, multiple band members of TOTO, alongside many others sharing a common humanity driven by the power of song.

Singer Jules Galli offers: "The metaphor of being a chameleon in our human society is something we can all relate to in our own way. The chameleon learns to blend in as a means of survival... he's got to stay invisible to predators while preying on his next meal. To me, the song is so deep that the meaning of the song keeps evolving through time. Within our authenticity lies our real power. Break free from this mode of survival and let yourself be seen, heard and accepted."

Drummer Josh Devine shares: "'Chameleon' is one of my personal favorites on our debut record. The meaning to me personally speaks to the idea that I don't want to just be another chameleon, blending in to fit in with the worlds agenda to be liked or loved for someone I am not. It may be the path of least resistance, but at what cost? Stand out and be YOU! Loud and proud. I'd rather be hated for who I really am, then loved for who I'm not!"

Guitarist Trev Lukather reveals: "'Chameleon' was one of the last songs we wrote and laid down in the studio. Originally it was supposed to be a deluxe track but we knew as we were writing and starting to build it, that it was an undeniable anthem that moved its way up as a serious contender on the album. My longtime friend Steve Perry, who was a huge presence on this record, brought a lot to the table on this track. He brought his legendary powerhouse vocals on the BGVs and group vocals. He and I built the epic bridge solo together. He even sang on top of the guitar solo melody. It was a spiritual experience making this song and it has such a spiritual meaning to it."

The music video was produced and directed by Jake Hays and Olivia DeLaurentis. Trev Lukather offers: "The video we made for 'Chameleon' shows how we all blend together. We all have our unique qualities and they are beautiful, we are beautiful. Truly showing we are one race, the human race. We had our close friends from all different backgrounds come by and sing a pass through the song. No direction other than sing along and be you. The song brought nothing but connection, happiness and love out of everyone that took the time to be a part of it. You can clearly see that in the video. Everyone shines. We all do and that's the truth. Let's love together, enough with the pointless hate."

Josh Devine echoes these thoughts, stating: "The video really captures the notion that we are all different and beautiful, and we should be celebrating that! I'm excited for the world to hear this!" Jules Galli adds: "I am so grateful for everyone involved in this video and thankful for Steve Perry in lending us his genius on this very special song."

Earlier this year, LEVARA and Mascot Records presented "Heaven Knows", the first recording to be shared in front of the band's debut studio album.

Trev Lukather, Jules Galli and Josh Devine are LEVARA. Collectively, their musical union brings life to the individual talents of three musicians that together have enriched the aural landscape for all of us. Their songs offer an escape, as all music does, with points of reflection that relate to any listener's life. The collective hope is simple. To be the catalyst for each and every person who comes across the music to find revelations through the experience of hearing these songs.

Their union merged in Los Angeles, one of the world's epicenters of musical creativity. Galli emigrated from France, while Devine chose L.A. as home versus his native United Kingdom following success behind the kit with ONE DIRECTION. There they found common vision with Trev Lukather (guitar), son of TOTO's Steve Lukather, one of SoCal's most successful ensembles to ever emerge from the city. On some level, these three players believe the universe brought them together.

Prior to recording their debut, the band toured the United States several times and supported TOTO on an arena tour last summer. While in Europe, they staged several headline appearances across Germany and other countries, floored by the response with fans coming out at every date. In early 2020, they began their collaboration with producer Ethan Kaufmann at Elephant In The Room Studios in East Hollywood. The album unequivocally captured the magic they sought to see take life.

"I believe LEVARA is a band that can spark an influence for young kids and people of all ages to pick up an instrument and feel that connection," Trev concludes. "At the same time of singing along to anthemic, feel-good, and emotional tunes, you can incorporate the heart and soul that started music in the first place. We want to inspire our generation and the next to want to pick up a guitar, pick up a bass, pick up drum sticks, or go for those high notes vocally. I feel there is a need for epic 'pop' tunes to have that musicianship behind them like the classic bands we all love and admire. I believe we accomplished that with our album. If we can influence that in any way, we are winning."