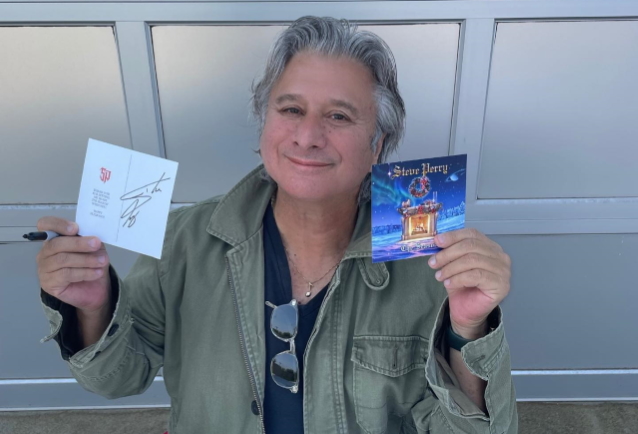 STEVE PERRY On His Appearance With JOURNEY At 2017 ROCK HALL Induction: It Was 'One Of The Most Fun Things I've Ever Done'

Steve Perry reunited with JOURNEY for the first time in years in April 2017 as they were inducted into the Rock And Roll Hall Of Fame. The iconic singer appeared onstage with his former bandmates as they each gave speeches, but did not perform with the group later in the event.

In a new interview with ABC Audio, Perry reflected on the experience, saying: "It turned out to be one of the most fun things I've ever done." He added that he was initially reluctant to make an appearance because "it had been so many years and the band's moved on" and he didn't want to make JOURNEY's current lead singer, Arnel Pineda, feel uneasy. "I love Arnel and I thought, y'know, out of respect for him and just where they'd gone, I thought I would just leave it alone," he said. "Then I had a friend of mine telling me, 'Look, you deserve to be there — you should be there too.' One thing led to another, and I went. And backstage, it became clear to me what I was doing there, and what I needed to say. I sketched some stuff on a paper, and when I got out there, I pulled the paper out and said, 'I got some things to say.' They gave us all about five to six minutes...and I thought, 'That's not going to cut it for me.' So I went ahead and took the moment, and thanked everybody."

During his Rock Hall acceptance speech, Perry praised each of JOURNEY musicians as well as Pineda, who was not being inducted into the Rock Hall. "I must give a shoutout to a man who sings his heart out every night, Arnel Pineda," Perry said.

Perry concluded his remarks by thanking the JOURNEY fans, crediting them for "put[ting] us here." He added: "You're the rock and roll hall of fame! From my heart, I must tell you, I've been gone a long time, [but] you've never not been in my heart. Thank you so very much."

Perry returned to music in 2018 with the release of his Fantasy album "Traces", which debuted at No. 4 on the Billboard album chart and No. 6 overall — a personal best for his solo work.

Perry has just released a holiday album "The Season", via Fantasy Records.