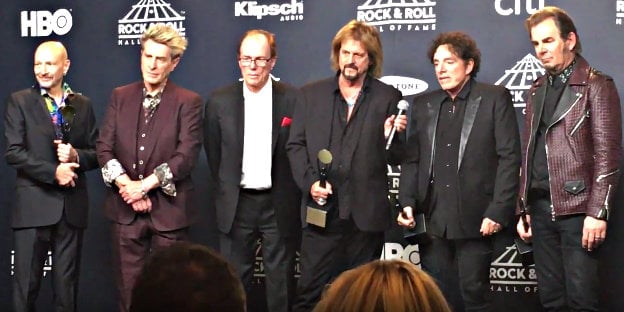 STEVE PERRY Reunites With JOURNEY, But Doesn't Sing At ROCK AND ROLL HALL OF FAME Induction

Steve Perry reunited with JOURNEY for the first time in years as they were inducted into the Rock And Roll Hall Of Fame earlier tonight (Friday, April 7). The iconic singer appeared onstage with his former bandmates as they each gave speeches, but did not perform with the group later in the event.

During his speech, Perry praised each of JOURNEY musicians as well as the band's current singer, Arnel Pineda, who was not being inducted into the Rock Hall. "I must give a shoutout to a man who sings his heart out every night, Arnel Pineda," Perry said.

Perry concluded his remarks by thanking the JOURNEY fans, crediting them for "put[ting] us here." He added: "You're the rock and roll hall of fame! From my heart, I must tell you, I've been gone a long time, [but] you've never not been in my heart. Thank you so very much."

Pineda, who has been the band's frontman since 2007, greeted Perry with open arms backstage at the ceremony.

"One the sweetest hug you can ever get from one of my heroes and silent mentors..it means the world to me..waited 35 years for this moment..thank you Almighty God," Pineda wrote alongside an Instagram photo of him hugging Perry.

In addition to Perry and guitarist Neal Schon, Jonathan Cain, Ross Valory, Gregg Rolie and Aynsley Dunbar were inducted, as well as current drummer Steve Smith, who's on his third run with the group.

The 32nd annual Rock And Roll Hall Of Fame induction ceremony was held at the Barclays Center in Brooklyn for the third time. An edited version will later air on HBO and there will be a radio broadcast on SiriusXM.

Artists are eligible for the Rock And Roll Hall Of Fame 25 years after the release of their first album or single.

Steve Perry is a class act and thanks Arnel Pineda for carrying on the music of Journey. @rockhall#RockHall2017pic.twitter.com/DxO7eWIb85