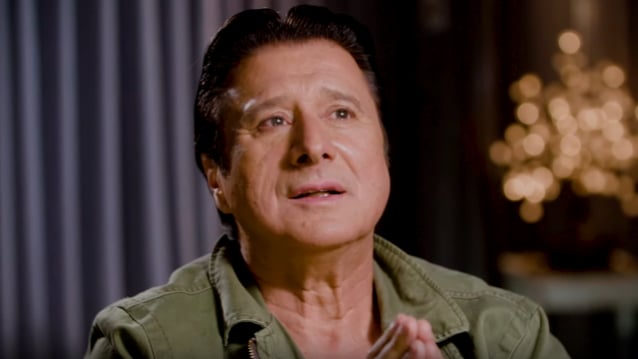 "John 5 came over to my place, and in a matter of a few minutes, we were just sketching some ideas," Steve recalled. "And I couldn't think of a title. And he said — 'cause he's got that edge and he's got that whole thing going on that he brings with him — and he says, 'You know, it's kind of like the sun shines gray. It's shining, but it's not bright and beautiful — it's gray.' And I went, 'Oh, God. I love the way that sounds.' 'Cause I love the way things sound, the way they work together. So I wrote it down, and that song started writing itself."

Perry's first solo album in more than two decades, "Traces", was released in October via Fantasy Records (a division of Concord Records/UMG).

Earlier this year, John 5 spoke to "Rock Talk With Mitch Lafon" about how his collaboration with Perry came about. He said: "My agent, John Ditmar, he was friends, or is friends with Steve Perry, and [Steve] was writing with people. And this is years ago — years ago. And he's, like, 'Oh, you should write a song with Steve Perry.' And he brought me up and things like that. So I went over to his house, [and] we wrote a ton of music. We totally hit off. [We] had a blast. [We] loved each other. We were having so much fun — a lot of the times not even talking about music; just hanging out and just whatever. And he's the greatest guy. And I would sit a foot away from him and we'd be recording music and he'd be singing, and I'll tell ya — it's like listening to the radio. This guy's voice is the same. It's crazy. I was right next to him, and I was, like, 'Oh my God! I'm gonna remember this.' 'Cause his voice sounded exactly how it always has, how I've listened to it my whole life… It was magical."

According to John 5, he still keeps in touch with Perry. "I text him all the time, and we're buddies," he said. "And he's the coolest dude ever. We have lots of fun things that we've done together. One thing that I did. And this was a hundred years ago; I've known him for a while. I was, like, 'Come to Long Beach. We're playing a concert.' It was Halloween. It was [ROB] ZOMBIE and ANTHRAX. It was this crazy show at Long Beach Arena, I think it was. Steve was, like, 'Okay. Cool. I'll come.' And I think Gene Simmons was there. It was like a 'who's who.' And here comes Steve Perry. And he was, like, 'Hey.' And people were freaking out. We were playing. And I don't think he had a good time. He didn't tell me, but I don't think he had a good time. 'Cause it was so crazy. The music and everybody was screaming and moshing. He was, like, 'What is going on here?' But I think that was the only thing he had to endure. But he never [complained about it]. He was, like, 'Oh, it was great. And it was fun.' He's such a nice person. He's such a great sport."

Asked if he thinks he will collaborate with Perry again, John 5 said: "I think he had a blast [last time]. It's, of course, up to him. And I'll always be there. If he wants to do some ticking and singing, I'll drive right up there."