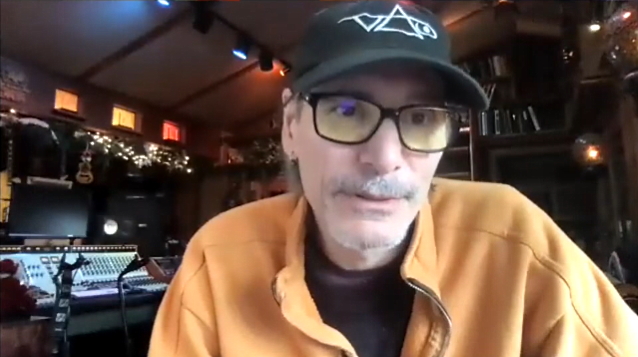 Steve Vai spoke to the "Rock Of Nations With Dave Kinchen" classic rock show about the impending retirements of two of his former bandmates, ex-VAN HALEN singer David Lee Roth and WHITESNAKE leader David Coverdale. He said (as transcribed by BLABBERMOUTH.NET): "It's really hard when you're a singer, first of all. Once you start getting into your 50s, 60s, things change [with your vocal cords].

"These guys are heroes — they came and they delivered hard. And God bless 'em. And now that they're at that point where they just wanna kind of gracefully bow out, I think that we should celebrate them."

"Eat 'Em And Smile" was the first of two Roth albums to feature the duo of Vai and Billy Sheehan on guitar and bass. Throughout the LP, the two would often sync complicated bass lines together with the lead guitar parts, as on tracks such as "Shyboy" and "Elephant Gun".

Following the eight-times-platinum success of its eponymous album in 1987, WHITESNAKE returned two years later with "Slip Of The Tongue". At the time, the band included Coverdale, Vai, bassist Rudy Sarzo, drummer Tommy Aldridge and guitarist Adrian Vandenberg. Vandenberg and Coverdale co-wrote all but one song on the album, but Vandenberg couldn't record them in the studio at the time due to a hand injury. To fill the void, Vai joined the band for the album and tour.

Earlier this month, Vai postponed his planned tour of North America until the fall. The first U.S. leg of dates will now begin on September 28 in El Cajon, California and wrap the first week of December. The itinerary will now feature performances in 52 markets as opposed to the initial plan of staging 54 shows. All ticket and VIP purchases will be honored for the rescheduled date. Vai's performance in Atlanta, Georgia will now take place at the Variety Playhouse instead of The Eastern and due to scheduling conflicts, the Milwaukee, Wisconsin and Billings, Montana shows will no longer be a part of the tour.

Approximately one year ago, Vai underwent shoulder surgery to repair an injury. That procedure was successful, enabling him to record the upcoming studio album release of "Inviolate" (Favored Nations / Mascot Label Group). In preparing for the tour, it became clear that a new injury emerged that requires another surgery, prohibiting the tour to be staged as previously announced.