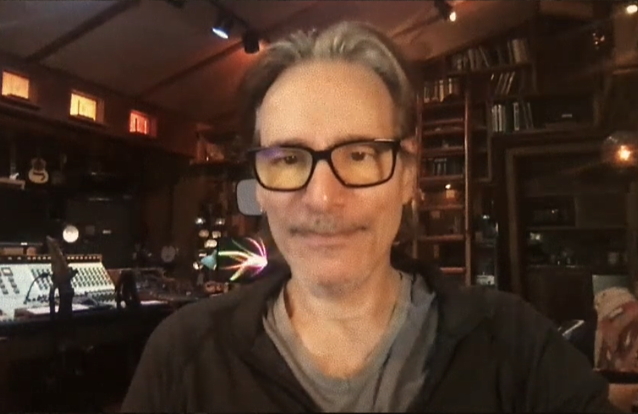 STEVE VAI On Possibility Of Reunion Of DAVID LEE ROTH's 'Eat 'Em And Smile' Solo Band: 'The Train Has Left The Station'

Guitar legend Steve Vai says that the train has "left the station" when it comes to a proposed reunion of VAN HALEN singer David Lee Roth's solo band following the cancelation of their November 2015 performance in Hollywood.

Roth's "Eat 'Em And Smile" reunion at the Lucky Strike Live nearly seven years ago was called off at the last minute by the fire marshal. The show would have marked the first time in three decades that Roth joined Vai, bassist Billy Sheehan, drummer Greg Bissonette (RINGO STARR & HIS ALL-STARR BAND) and keyboardist Brett Tuggle to perform some of the hits from the classic LP.

Asked in a new interview with Barbara Caserta of Italy's Linea Rock about the possibility of a "Eat 'Em And Smile"-era band reunion, Vai said (as transcribed by BLABBERMOUTH.NET): "You never know about these things. And we touched on it in the past. It's a logistical thing too, because Dave had VAN HALEN, I had my solo career, Billy has… everybody is kind of busy. And I would only have done it with the 'Eat 'Em And Smile' [lineup], I think. And the idea was very intriguing, and I never rule out anything. But as time went on, the train kind of left the station. I understand now that Dave is retiring so I don't know when something like that could happen. It's a long shot."

Vai, Sheehan and Bissonette reunited on in January 2019 for a two-song performance at "Ultimate NAMM Night" in Anaheim, California. They were joined by singer Jeff Scott Soto (SONS OF APOLLO, TALISMAN, YNGWIE MALMSTEEN) to play a cover of the QUEEN classic "Tie Your Mother Down" and the Sheehan-penned TALAS headbanger "Shy Boy" which appeared on the "Eat 'Em And Smile" album.

Billy said in a 2017 interview with Songfacts that he was "ready to go" if Roth ever decided to do some shows with the "Eat 'Em And Smile" band. "We have a great respect and love for Dave and what he did for us," he continued. "There's no secret undercurrent thing going on that I'm not talking about. The fact of the matter is it's Dave's call. If he chooses to do so, I couldn't be happier."

Last month, Roth issued a brief statement after the cancelation of the remaining farewell shows he was set to play at the House Of Blues at Mandalay Bay. The 67-year-old VAN HALEN frontman had previously scrapped concerts scheduled for New Year's Eve and New Year's Day and was to play a total of nine shows as he vowed to retire from performing live.

When asked if Roth's farewell performances will take place at a later date, he told Fox News Digital in a statement: "It's not about me anymore. When the benefits for Kentucky, Colorado, and Farm Aid kick in; Call me."

In a similarly worded statement to EW, Roth said about the cancelation of his Vegas residency: "Sometimes you win, Sometimes you lose, We got rained out.. "Covid cancelled.

"Future shows? When the benefit concerts for Colorado, Farm Aid, and hospital workers 'everywhere' come up; Call me..," he added.