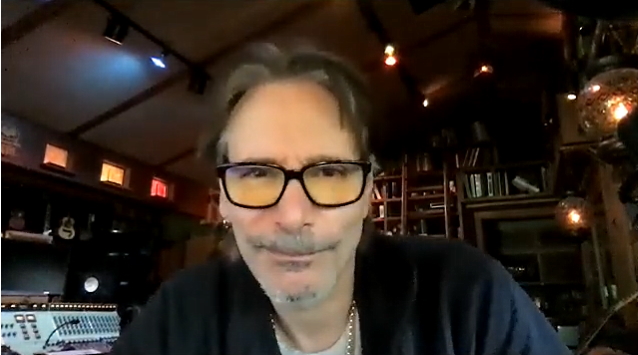 In a new interview with IndiePower.com, Steve Vai spoke about his years as the guitarist in David Lee Roth's post-VAN HALEN solo band, alongside former TALAS bassist Billy Sheehan and drummer Gregg Bissonette. Asked what his favorite memories are of that period, Steve said (as transcribed by BLABBERMOUTH.NET): "Well, there were so many. Touring, becoming a 'rock star' basically overnight by joining David Lee Roth's solo band when he left VAN HALEN was just a shocker. Every night on tour was just… Oh my God, it was something that I'm really glad I experienced. And there was a lot of other things. The camaraderie between me and Billy and Gregg was, and still is, very strong, and those are life relationships that you can't put a value on them. So that I got out of that. And one of the things I really enjoyed doing was learning things from Dave. I mean, he was an intense guy. We hung out a lot and would do things like go climbing — he was really into climbing mountains at the time. So we'd hire these fantastic guides and we'd go and do stuff like that. He got me into working out because I looked like a noodle when I joined the band. [Laughs] And I really enjoyed all of that. I really had a good time there."

A few years ago, Vai explained to the Examiner.com that he didn't expect the "Eat 'Em And Smile" band to come together when they first hooked up more than three and a half decades ago. He said: "Dave got the best musicians he could, who he thought was the best. And I thought it was a hell of a band… It was one of my favorite times in my whole musical career, because we were rock stars, you know? And touring with somebody like Dave, you can't even imagine what it was like. It was just glorious, man. And I knew it was fleeting, and I knew it was something that I wasn't going to be doing my whole life, because my brand of music in my own head is very different."

"Eat 'Em And Smile" was the first of two Roth albums to feature the duo of Vai and Billy Sheehan on guitar and bass. Throughout the LP, the two would often sync complicated bass lines together with the lead guitar parts, as on tracks such as "Shyboy" and "Elephant Gun".