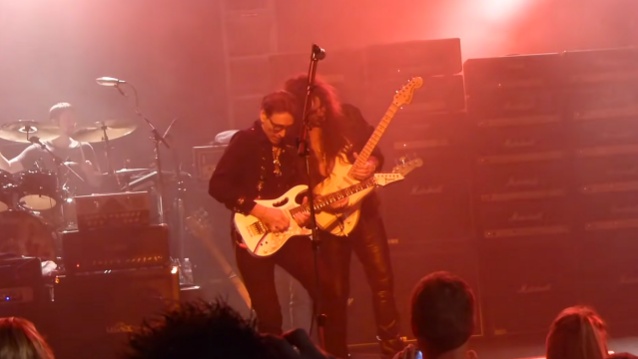 STEVE VAI Says Performing 'Black Star' With YNGWIE MALMSTEEN Was 'Challenging': 'Nobody Can Play Like Him'

In a new interview with Myglobalmind, Steve Vai spoke about what it was like for him to join Yngwie Malmsteen for a performance of the legendary Swedish guitarist's classic song "Black Star" during their joint "Generation Axe" tour, which took place over several legs between 2016 and 2019. He said: "I can't play like Yngwie; nobody can play like him. Nobody can play like me. Nobody can play like anybody. What I did was take the harmony or melody of the song and play it the way I would do it. It was challenging because there were a lot of little fast runs with his fingerings and his tonal center, which is different than mine. I had to work on it. I could do it, but when it came time as to playing against each other, I'm Steve, and he is Yngwie."

Referencing the rest of the "Generation Axe" bill, which included Zakk Wylde, Nuno Bettencourt and Tosin Abasi, Vai continued: "That is one of the greatest things about that tour; they are all extremely confident in what they do. They don't compete with you at what you do. What happens is it forces us to compete with ourselves to be the best we can be. Zakk is being Zakk as best as he ever can be. We are all helping each other to push all sorts of aspects of being professional to stage appearance to communication to playing to off-stage etiquette."

"Generation Axe" saw the five musicians sharing a backing band and performing together in addition to playing individual sets. A year after their successful inaugural tour, the five guitarists reconvened for an 11-city tour of Asia that included a stop in Beijing, China. Select performances from that April 2017 concert appeared on a live recording, "Generation Axe - The Guitars That Destroyed The World: Live In China", which was released in June 2019 via earMUSIC.