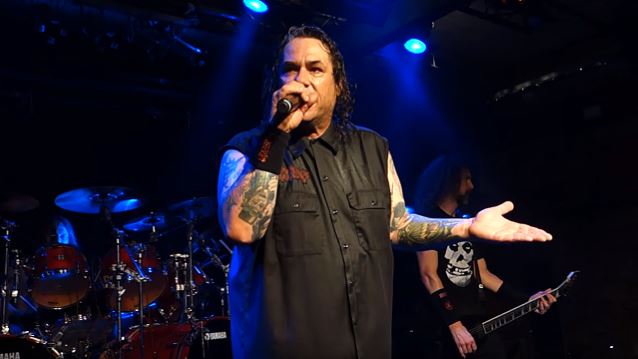 United Rock Nations conducted an interview with vocalist Steve "Zetro" Souza of San Francisco Bay Area thrashers EXODUS on July 31 at the Xtreme Fest in Carmaux, France. You can now watch the chat below. A couple of excerpts follow (transcribed by BLABBERMOUTH.NET).

On EXODUS's enduring influence and longevity:

Zetro: "Well, when you're the innovator of a sound, when you're there in the beginning… There's gotta be somebody there in the beginning, and there's not just one: there's METALLICA, SLAYER and ANTHRAX and MEGADETH and TESTAMENT and EXODUS and DEATH ANGEL and OVERKILL and DARK ANGEL… All those bands were there in the beginning, and I think 'cause we still put out quality music — really good, heavy music. It's not like just because we are thirty years into our history now that we feel we can, 'Ah, we'll just write a couple of good songs, and seven of them will just sound okay.' No. Every song on the album has to still kick ass — has to."

Zetro: "I think that that record set the level, set the bar for thrash. If this is what you wanna be as a thrash band, you have to have songs that are [fast] and then songs that grind. And lyrically, it's dirty and 'kick in your face and rape and murder your wife.' Really dirty. We write about piranha. Why? Because a piranha will eat you, you know what I mean? We write about 'deliver us to evil,' not 'deliver us from evil.' And, of course, 'Strike Of The Beast'. That record… The way I explain it, it's like somebody's hand is in front of your face for 54 minutes — just like that. That's how I explain 'Bonded By Blood'."

On EXODUS's evolution between the late '80s and now:

Zetro: "[The difference is in the] musicianship. I was a kid when I put that out. I was 21. I'm 52 now. I've been doing this for 31 years on a record level, so if you don't know how to do something after 31 years, maybe you shouldn't be doing that anymore, you know what I mean? So I feel that the musicianship, as far as writing and playing, is all top notch, and that's why the band is successful."

EXODUS drummer Tom Hunting recently told Spark TV that the band will begin work on the follow-up to 2014's "Blood In Blood Out" album in January 2017.