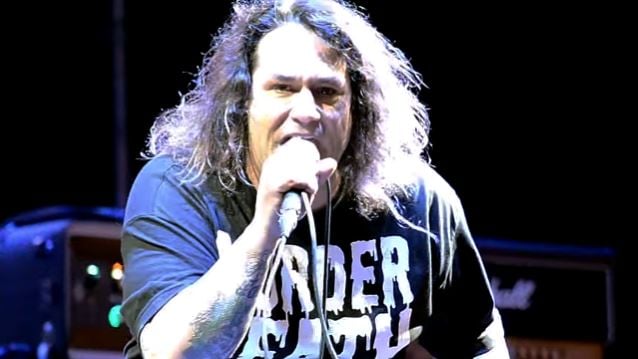 STEVE 'ZETRO' SOUZA Is 'Having A Blast' Being Back In EXODUS

Metal Wani recently conducted an interview with vocalist Steve "Zetro" Souza of San Francisco Bay Area thrash metal veterans EXODUS. You can now listen to the chat in the YouTube clip below.

Asked if he has truly mended fences with the other members of EXODUS since he rejoined the band in June 2014, Zetro said: "That's water under the bridge. It is. It really is. I don't carry myself in the manner [that] I used to carry myself [in]. I'm very positive most of the time, [whereas] before I was kind of negative. And I would be, like, 'Ah, I can't wait until the shit's over with.' And who wants to be on tour with a guy like that? So a lot has changed about myself and how I approach it. And I love it now, and I'm having a great time with it. So I won't sit there and have a pissing match with Gary [Holt, EXODUS guitarist] anymore. I won't yell. We won't argue anymore. That doesn't exist in my world — in our world. We get along fine. We understand if there's something… And there's been things in the last thirteen months. I didn't come in perfect. And there's been things. 'Hey, man, Zet, do this.' Or, 'We don't do this.' Or, 'We wanna try not…' And I'm totally, like, 'Oh, okay, cool. Yeah. No problem.' Before I'd be like, 'You know what?! Play guitar and shut the fuck up.' And that's the way I was. And that's terrible to be that way. But, like I said, I get along with everybody now. There's no bullshit anymore. I won't have it. Most of it was pretty much on my part, just 'cause I was so hard to deal with. And now I'm just having a blast."

"Blood In Blood Out" is EXODUS' first album since the departure of the band's lead singer of nine years, Rob Dukes, and the return of Souza, who previously fronted EXODUS from 1986 to 1993 and from 2002 to 2004.