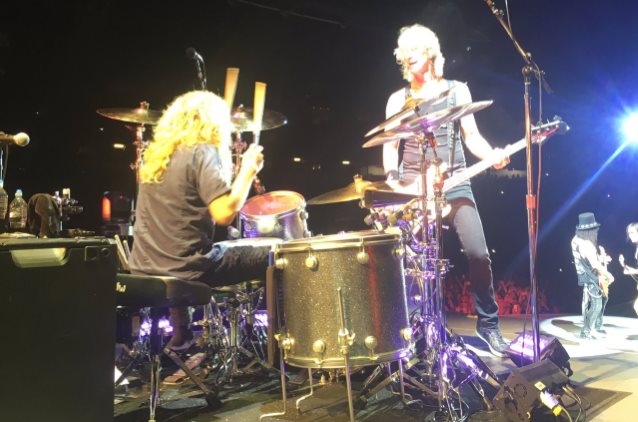 Drummer Steven Adler rejoined GUNS N' ROSES on stage earlier tonight (Wednesday, July 6) in Cincinnati, Ohio to perform two songs: "Out Ta Get Me" and "My Michelle". This marked Adler's first appearance with GN'R since 1990.

Singer Axl Rose introduced the drummer to the Brown Stadium crowd by simply saying: "On the drums, you might know this guy. Ladies and gentlemen, Mr. Steven Adler." After playing "Out Ta Get Me", Axl said: "I guess we should do another."

Fan-filmed video footage and photos of Adler's appearance can be seen below.

A source close to GUNS N' ROSES told LA Weekly that Adler was having back surgery around the time of GUNS N' ROSES' April 1 concert at The Troubadour, which was the real reason his band ADLER canceled its show at the Whisky A Go Go. The LA Weekly writer claimed that he was also "told [Adler was] not ready to tour with GN'R, not yet, and maybe not ever."

Fan speculation around the involvement of Adler had been heavy, with some of the bandmembers reportedly not sure whether the drummer, who has a longer history of drug problems than any of the other musicians, could hold it together on the road.

Adler was fired from GUNS N' ROSES in 1990 for his rampant drug use and replaced by Matt Sorum.

Look who's back... STEVEN ADLER ROCKING HIS FIRST SHOW BACK WITH GUNS N ROSES!!!! #GunsNRoses#StevenAdlerpic.twitter.com/qVdo1s6odM