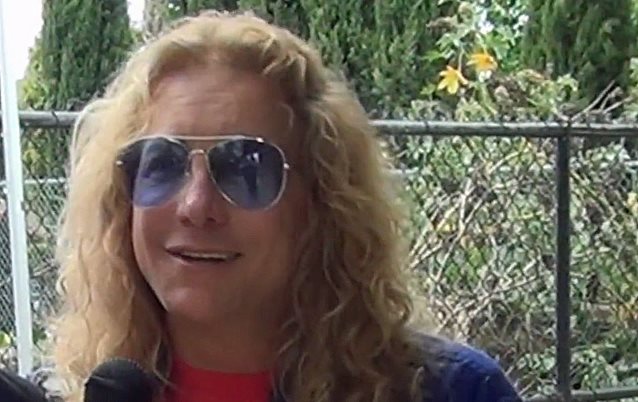 Steven Adler says that he would like to play a few more songs with GUNS N' ROSES than he got to perform with the band when he reunited with GN'R for the first time in 26 years during the 2016 leg of the "Not In This Lifetime" tour.

Adler appeared with GUNS N' ROSES onstage last November in Buenos Aires, Argentina, as well as on three separate occasions during the U.S. leg of the "Not In This Lifetime" tour last summer.

This marked Adler's first appearance with GUNS N' ROSES since 1990, although he performed with members of the band at their 2012 induction into the Rock And Roll Hall Of Fame.

During a May 7 interview with Argentinean rock journalist Lucas H. Gordon at the Ride For Ronnie motorcycle rally and concert in Encino, California, Adler stated about his reunion with GUNS N' ROSES (see video below): "That was so great. It was really, really amazing and a dream come true. 'Cause for twenty-five years, all I've been doing was praying that I would be able to do it. I just wish I could play more songs, 'cause I wanna do more with them. It's really hard… it's heartbreaking and hard on me to be standing on the side of the stage and watching somebody else [current GUNS N' ROSES drummer Frank Ferrer] play my songs. Which, he is great, but it's hard for me. It's, like, I'd like to play a few more songs. But I'm thankful I got to do anything at all, so my dream came true. But I do wanna do more. I hope… We'll see what they say."

Adler performed two songs with GUNS N' ROSES on the U.S. leg of the "Not In This Lifetime" tour: "Out Ta Get Me" and "My Michelle".

Back in February, Adler revealed that he was originally supposed to appear at more than just a handful of shows on the GUNS N' ROSES reunion trek. He told the "One On One With Mitch Lafon" podcast that he expected to sit behind the drum kit for all the "Appetite For Destruction" material during the entire tour, only to be told he was out after he hurt his back during rehearsals. "[Bassist] Duff [McKagan] called me and said, 'Dude, you're not gonna play with us anymore,'" Adler said. "'You're not gonna do these shows.' And I was, like, 'You're the worst fucking person in the world.'"