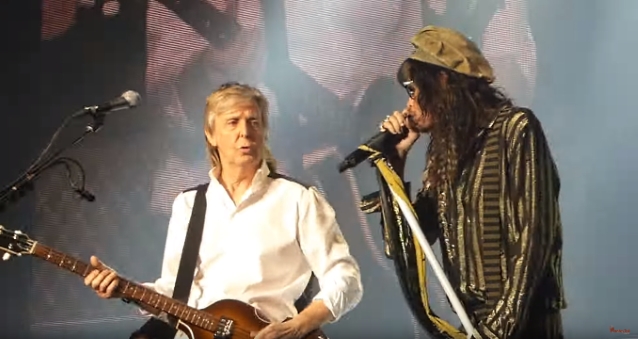 McCartney, who turned 77 a little more than a week ago, returns to T-Mobile for a second show on Saturday.

Las Vegas is the only city with back-to-back dates on the U.S. leg of McCartney's "Freshen Up" tour.

McCartney is touring in support of his 17th solo album, "Egypt Station", which came out last September, and "Freshen Up" is billed as a nearly three-hour ride through the singer's epic career.

AEROSMITH returned to the stage at Park Theater in Las Vegas on June 19 to start the second leg of its "Deuces Are Wild" residency.

The band is scheduled to play 22 more shows in Las Vegas dates before the end of the year — one in June, four in July, four in September, four in October, seven in November, and two in December. The band also has multiple-night "Deuces Are Wild" engagements booked at MGM properties in National Harbor, Maryland; Atlantic City, New Jersey; and Springfield, Massachusetts.

In addition to the "Deuces Are Wild" shows, AEROSMITH is slated to make two festival appearances this summer: July 14 at the Roxodus Music Fest in Edenvale, Canada; and July 19 at the Twin Cities Summer Jam in Shakopee, Minnesota.