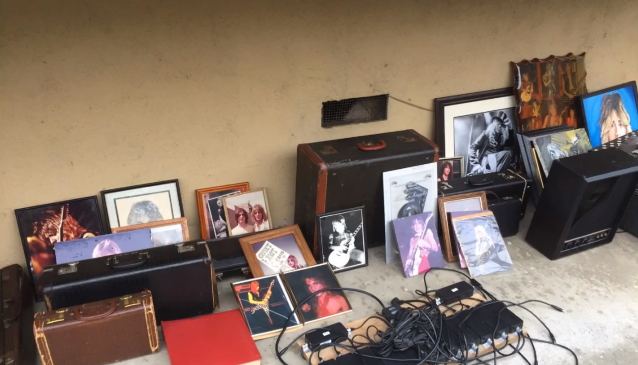 Several items belonging to legendary OZZY OSBOURNE guitarist Randy Rhoads and his family were recovered over the weekend after being stolen from North Hollywood, California's Musonia School Of Music, which was founded more than 70 years ago by Randy's mother, Delores Rhoads.

Local resident Bobbi Fredriksz says she spotted a guitar and photos in a dumpster as she was walking her dog early Sunday morning. She initially didn't think anything of it until she got home and saw a report about the theft on ABC7.

"As I was laying in bed, not feeling well, when it came on I was like wait a minute, oh my God," Fredriksz told ABC7. "I ran all the way back over here it was still here. Somebody else started to see it and called police."

The first electric guitar Randy ever played, a Harmony Rocket from 1963, and two horns that belonged to his late mother were stolen during the Thanksgiving night burglary and are still missing.

A few days after the theft, Ozzy personally offered a $25,000 reward for the return of his late bandmate's guitars.

An ABC7 video report on the recovery of the Rhoads items can be seen below. Also available is The Metal Voice's audio interview with Barry Stiglets, who joined Fredriksz while she was walking her dog and discovered the Rhoads items in a dumpster at 6:30 a.m. on December 8.

Photo courtesy of The Metal Voice