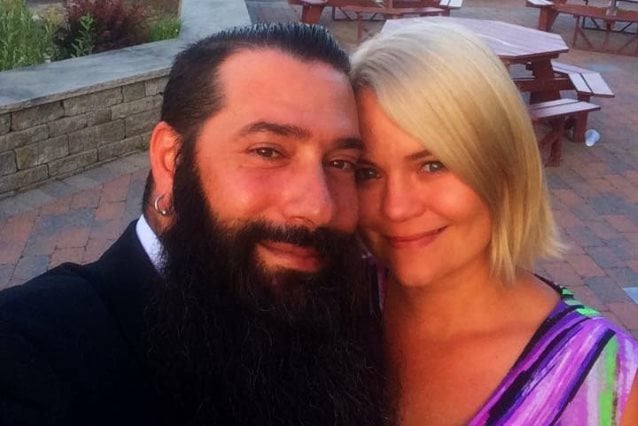 STONE SOUR bassist Johny Chow proposed to his longtime girlfriend Christi Allen during the band's July 25 concert at Budweiser Stage in Toronto, Ontario, Canada as the support act for KORN. She, of course, said yes, and the video of this happy moment can now be seen below.

STONE SOUR's bassist since 2012, Chow has an extensive music history that includes stints with CAVALERA CONSPIRACY, SOULFLY and FIREBALL MINISTRY. Throughout the course of his career, the Buffalo native has also played with SYSTEMATIC, ECHO 3, SOULS OF RUIN, MAXIMUM PENALTY, MY RUIN and PUSHED.

Asked what made him want to start playing the bass in the first place, Chow told Eden Amps: "I originally started out on drums. In third grade, they offered lessons for piano, violin and drums, so I chose drums. Then, when the class began, they handed me a pair sticks, a wooden block with a rubber pad on it, and a book full of these strange squiggly lines! I was like, 'Where is the drum set?!?' I wanted to pound on drums not a wooden block. So, needless to say, after learning how to read some fundamental rudiments and the lessons finished, I didn't pursue the drums anymore. Also, my neighbor had a drum kit and was coming along as a player so it seemed pointless to have two drummers when we were talking of playing around. Shortly after making that decision, I picked a hollow bodied guitar from the garbage. It only had the four low strings on it and I started jamming with my neighbor. I didn't know any chords, so I was single-noting it. Then a mutual friend of ours came in the mix and he could play power chords, so I stayed with the single note stuff — I just turned all the knobs (not knowing what they really did) until I got a lower, bassier tone."

Regarding how he landed the STONE SOUR gig, Chow said: "In 2002 I joined the band SYSTEMATIC, featuring SLAYER drummer Paul Bostaph. We were on STONE SOUR's first U.S. tour and I stayed friends with Jim Root and his guitar tech, Martin Connors, over the years. I had just gotten done playing the Big Day Out festival in Australia with CAVALERA CONSPIRACY and Max [Cavalera] was about to release a new SOULFLY album. I knew he would tour that cycle which meant that CAVALERA CONSPIRACY would have at least a year off. So, I got a hold of a friend, Rob Blasko [ex-ROB ZOMBIE bassist, now with OZZY OSBOURNE and also manager of BLACK VEIL BRIDES and Zakk Wylde], told him I had a year off and asked if he knew of any gigs out there needing a bassist. He told me that STONE SOUR needed someone so I immediately reached out to Jim and my longtime friend, Roy Mayorga [STONE SOUR drummer]. The rest is what it is."

STONE SOUR is continuing to tour in support of its latest album, "Hydrograd", which was released on June 30 via Roadrunner Records.