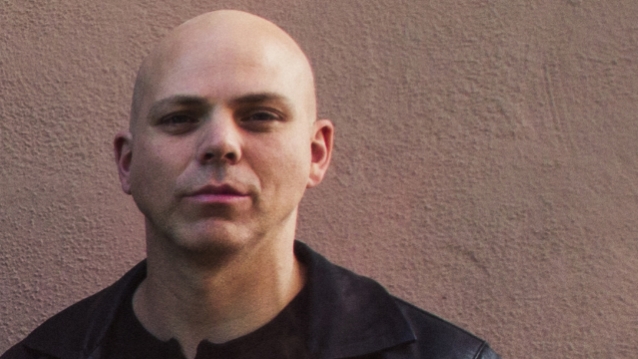 STONE SOUR guitarist Josh Rand has admitted that staying clean and sober on the road has been "more difficult" than he expected.

Rand received treatment earlier this year for "an alcohol and Xanax dependency" which forced him to sit out one of the the band's tours.

Josh performed with STONE SOUR on the ShipRocked cruise in mid-January before stepping away for what were at the time unspecified issues.

STONE SOUR enlisted a temporary replacement for its Canadian tour, with singer Corey Taylor later saying that Rand would rejoin his bandmates in April at the Welcome To Rockville festival in Jacksonville, Florida.

STONE SOUR spent this past spring and the early part of summer playing select shows in the U.S and completing a European tour which saw them making appearances at some of the biggest rock festivals on the continent, including Rock Am Ring, Sweden Rock Festival and Hellfest.

In a brand new interview with Andy Hall of the Des Moines, Iowa radio station Lazer 103.3, Rand was asked if making sobriety last has been tougher than he imagined. "Honestly, yes," he responded (hear audio below). "Europe, for me, was really trying — just for the simple fact of… When I was touring in the U.S., it was easy for me to have structure, and that's one thing that I learned on both of these tours — the U.S. one and then the European summer tour — I'm a guy that needs structure. And there was definitely times when the temptation was there, and it was a challenge. But I have a great support group within the band and the people that work for us, and then my fiancée came out midway through, so that was the extra support. But it was a little bit more difficult than what I thought going into it."

Earlier this year, Rand said that "nobody had any idea" that he had been on Xanax since 2010 after he was first prescribed it for anxiety related to flying. He added: "And then, over the course of the last couple years, I started drinking, and when we started touring, I was basically day-drinking. But not drinking to get messed up, but just to maintain, I guess. Or to be able to cope, to have this buzz."

The guitarist said he just started feeling "horrible and miserable" and that things came to a head for him on the ShipRocked cruise.

Rand recalled: "We were flying from Florida back up to Canada and basically we were in the airport and I just had made the decision that I had to come home. Luckily, I had the support of the other guys and my family to make that decision. I had hit a wall and knew that I needed to regroup and deal with my stuff. So that's what I did."

"Hydrograd Deluxe Edition" features 13 rare or unreleased songs, including an acoustic version of the No. 1 rock song "Song #3", as well as covers of hits from RAGE AGAINST THE MACHINE, SOUNDGARDEN and VAN HALEN.