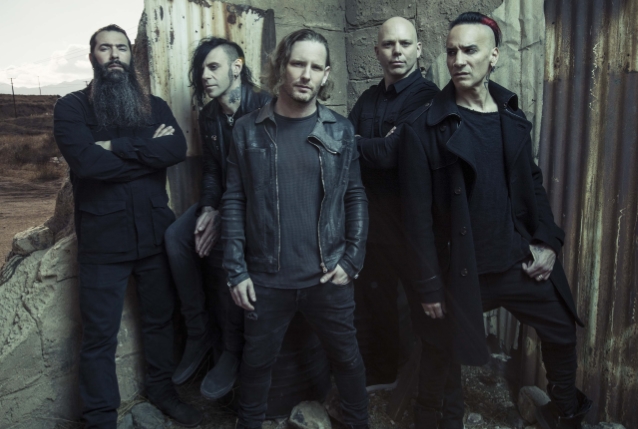 STONE SOUR Is 'Looking Forward' To Trying To Top 'Hydrograd' On Next Album, Says COREY TAYLOR

Corey Taylor has confirmed to Australia's Heavy magazine that STONE SOUR has already begun working on material for the follow-up to last year's "Hydrograd" album. "We started writing new music pretty much as soon as we got on the road," he said (hear audio below). "We just can't be stopped; we're just gluttons for punishment at this point. But the cool thing is that knowing that we've got all this great material, we can kind of enjoy the rest as much as we can because we know that when it's time to really start kind of ramping up the demo machine, we're gonna have all this cool stuff to listen to. There's no pressure for us to just run right in."

Taylor, who will step away from STONE SOUR in 2019 to focus on SLIPKNOT, said that the former band's absence from the touring circuit "will allow the audience to miss [STONE SOUR], which is the best thing in the world you can have — that built-in need for a band to come back. Just when you think you can't wait any longer, here comes this band and they're, like, 'Oh, goddamn, they're so good right now.' So we're pretty stoked, man. We're definitely looking forward to trying to see if we can top 'Hydrograd'."

Asked whether it gets easier or harder to come up with new material the more he writes, Taylor said: "It definitely is harder. Honestly, for me, the challenge is just making sure that I'm not repeating myself. When you get to the point where next year will be my 20th years professionally of doing this, that's a lot of music, that's a lot of lyrics, that's a lot of things to say, especially from a loquacious person like myself. You don't wanna make yourself look like a one-trick pony, so I'm constantly trying to make sure that… Now, it may be the same message, but I don't wanna use the same words to convey it, especially from a creative standpoint, from an artistic, from a poetic standpoint. That's been the biggest challenge. Luckily, I feel like I haven't done that yet, but at the same time, it's made a lot of work for me, bcause I go back and I pore over my lyrics like someone trying to find Waldo on a painting from 1776. I just make sure that I've exhausted every word, every phrase, everything that could be construed as a repeat. And once I'm done doing that, once I'm happy with where I'm at, then that's when it goes out for consumption. But I still love the challenge, so I'm almost like a glutton for punishment."

"Hydrograd" was released as a deluxe edition on August 31. The two-disc set, "Hydrograd Deluxe Edition", collects unreleased covers, b-sides, live recordings and alternate versions of songs from "Hydrograd". The deluxe edition is highlighted by "Burn One Turn One", a previously unreleased b-side from "Hydrograd". "Hydrograd Deluxe Edition" features 13 rare or unreleased songs including an acoustic version of the No. 1 rock song "Song #3", as well as covers of hits from RAGE AGAINST THE MACHINE, SOUNDGARDEN and VAN HALEN.

STONE SOUR is supporting Ozzy Osbourne on the initial North American leg of the legendary vocalist's "No More Tours 2" tour, which kicked off August 30 in Allentown, Pennsylvania.