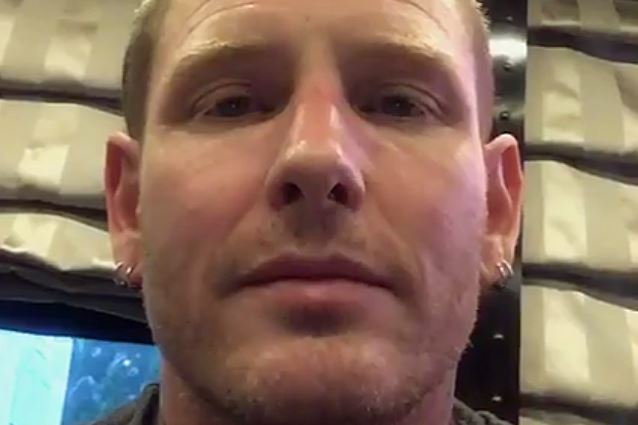 According to The Pulse Of Radio, STONE SOUR and SLIPKNOT frontman Corey Taylor offered his thoughts on LINKIN PARK singer Chester Bennington's recent comment that LINKIN PARK fans should "move the fuck on" and stop asking the band to return to the sound of its 2000 debut album, "Hybrid Theory". In an interview with "Shmonty In The Morning", which airs on the Tucson radio station KFMA-FM, Taylor said (hear audio below) "I understand where he's at. God, I would've never say it the way he did, but you get frustrated and you want people to embrace the evolution. But at the same time, man, you should probably be very, very fortunate that people this long along the line still love that music you made, that album that you made.

Taylor added: "For what it's worth, ['Hybrid Theory'] is a great fusion rock album. It's got pop elements to it, the songs are great. So if you're gonna have a good problem, that's a good problem to have. So I understand his frustration, but at the same time, it's, like, why would you get mad at your left foot because your right foot is doing pretty good? It's weird. Be fortunate for what you have, be fortunate for that fact that people are still coming to see you to hear the music. Give it a little time — you have to give it a little time. 'Cause in retrospect, maybe two or three years from now you put out an album and it makes them appreciate this one more. You have to pick your spots, dude, and this is coming from the guy who's notorious for running his mouth."

Asked about some fans saying LINKIN PARK had "sold out" with the pop direction of its new album "One More Light", Bennington told Music Week: "If you're saying we're doing what we're doing for a commercial or monetary reason, trying to make success out of some formula, then stab yourself in the face… Why are we still talking about 'Hybrid Theory'? It's fucking years ago. It's a great record, we love it. Like, move the fuck on. You know what I mean?"

To be fair, Bennington told The Pulse Of Radio a while back that he has a vast appreciation for LINKIN PARK fans. "I think we have the best fans in the world, and we just totally appreciate everything they do for us, in whatever way, you know, our fan club, our street teams, just kids out there just buying records or coming to the shows or whatever," he said. "It's awesome, and everything we do, they support us one hundred percent and we wouldn't be here if it wasn't for them. So we just totally, we love 'em and try to do as much as we can for 'em."

Meanwhile, both Bennington and LINKIN PARK vocalist Mike Shinoda have attempted some damage control following Bennington's remarks. Bennington tweeted about "Hybrid Theory" that he loves the record and is "glad people still do to," later listing all seven of the band's albums as "equaling" LINKIN PARK.

For his part, Shinoda wrote, "For the record, all fans of all albums are welcome here. Online or at the show, HT to OML. Don't let anyone tell you otherwise."

"One More Light" arrives in stores on May 19.