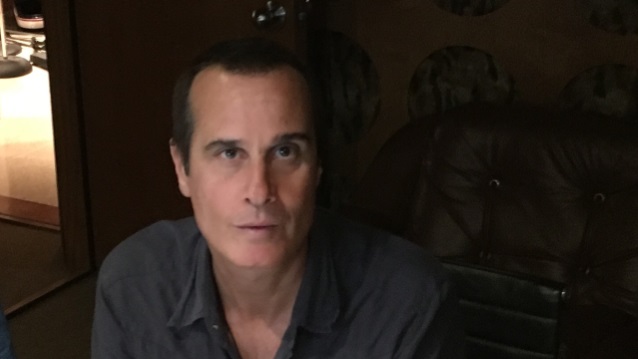 STONE TEMPLE PILOTS Bassist On SCOTT WEILAND: 'What We Created Together Is Something That Will Always Be In My Existence'

In a brand new interview with The Morning Call, STONE TEMPLE PILOTS bassist Robert DeLeo was asked what kind of relationship, if any, he had with the band's former lead singer, Scott Weiland, at the time he passed. "Um, we didn't, really," Robert replied. "The relationship was a bit different from when we started out together. But, you know, I always loved the guy. I always loved Scott, and what we created together is something that will always be in my existence — my soul, my body, you know? That will always be there, and I really have to thank him for [my] being here now. He was partly responsible for that, and I'll never forget that."

STONE TEMPLE PILOTS dismissed Weiland in 2013, five years after the band reunited in 2008. The band later sued Weiland, citing his erratic behavior, poor performances and prioritizing of his solo career as reasons for letting him go. Weiland countersued the group, although the dispute between the band and singer was eventually settled.

Weiland died in December 2015 from a lethal mix of drugs and alcohol while on a tour with his solo act, THE WILDABOUTS.

STP's self-titled seventh studio effort was released on March 16 and is the band's first with new singer Jeff Gutt.

Between group's self-titled 2010 record with Weiland and this year's effort, STP cut the "High Rise" EP with singer Chester Bennington in late 2013. Bennington returned full-time to LINKIN PARK in late 2015 and committed suicide in July of last year.

Gutt made his live debut with the band last November in Los Angeles. The band recently did its first round of dates in support of the new album and will join forces with BUSH and THE CULT for the first time this summer for the "tri-headlining" "Revolution 3 Tour". The North American amphitheater trek begins on July 18 in Nashville and will hit an additional 19 cities over six weeks before concluding in Phoenix, Arizona on September 2. Each group will perform a full set in a different order each night.