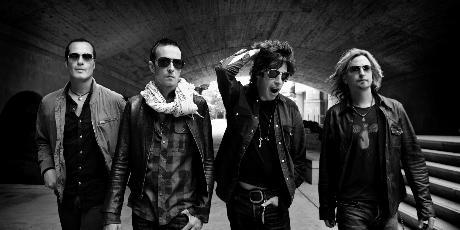 STONE TEMPLE PILOTS Guitarist: Regardless Of What Happened, The Four Of Us Are Brothers

The New Zealand Herald recently conducted an interview with STONE TEMPLE PILOTS guitarist Dean DeLeo. A few excerpts from the chat follow below.

On being music's best babysitter, having looked after the band's notorious trainwreck of a singer, Scott Weiland:

"If there was an award given out for patience and compassion I'd have a mantel full of them."

"It's been 20 years I've been in this band and if I allow myself to get bent over and angry, and lost in that bullshit world of anger, then who's the idiot here?

"And look, regardless of what you hear about what happened, the four of us are brothers. We grew up together.

"We'd been literally shoulder to shoulder — and Scott and I actually lived together, sharing a room together back when we first started touring and had a house together — for a long time, and you know what?! We started getting really tired of one another's routines. It was a much-needed break."

"I don't think any of us planned on [the break] being that long but Scott had huge success with VELVET REVOLVER, and we were all respectful of it, and we didn't want to throw a wrench in that machine. But then eventually all rivers flow back to the sea don't they?"

"[Before] it was all about the band, but [now] the band is pretty much second to all of us. First and foremost we've all become parents, and that takes precedence over everything. But yeah, personally speaking, life has changed, because being a dad puts you in a place where you want to do all you can as a human being as a father and a friend. It's our responsibility to mould these little monkeys."

On the band's latest, self-titled album:

"All of our records were different from one another, which was a very concerted effort on our part to try not to repeat ourselves, and as a guitar player and songwriter I try to stumble upon new things, and of course there are always new inspirations. For us, and me personally, I don't really like to visit where I have been before."

Read the entire interview from The New Zealand Herald.