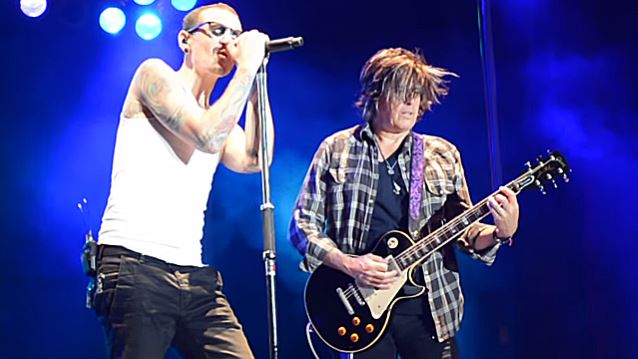 As they wrap up their current sold-out tour, STONE TEMPLE PILOTS have announced more dates this fall, kicking off September 15 at the House of Blues in Cleveland, Ohio. Tickets go on sale to the public May 1, but a special pre-sale begins Wednesday, April 28 at 10:00 a.m. local time. There will be a limited number of VIP tickets available that include a meet-and-greet with the band.

$1 per ticket will be donated to Music For Relief, a non-profit organization dedicated to disaster relief and environmental protection. Funds raised will support long term Hurricane Sandy recovery in New Jersey including housing assistance and home repairs, mental health and social services as well as tree planting. Music For Relief is also responding to provide aid to Nepal following Saturday's devastating earthquake including clean water, sanitation, and emergency medical treatment.

For further information, go to www.stonetemplepilots.com.

STONE TEMPLE PILOTS have teamed up with Live Nation and Yahoo! to live-stream their April 27 concert from Irving Plaza in New York City. This is one of 365 concerts to stream over a 12-month period on the Live Nation channel on Yahoo! Screen.

Fans will also have the freedom to stream the concert wherever they are through Yahoo Screen on iOS, Android, mobile Web, desktop, and Smart TV platforms, including Apple TV, Roku and Xbox 360.

STONE TEMPLE PILOTS recently dropped the added "With Chester Bennington" from their name after settling their legal issues with their former lead singer Scott Weiland.

The band began working with Chester Bennington in May 2013 after firing Weiland three months earlier. So far it has released one EP called "High Rise" with Bennington on vocals.