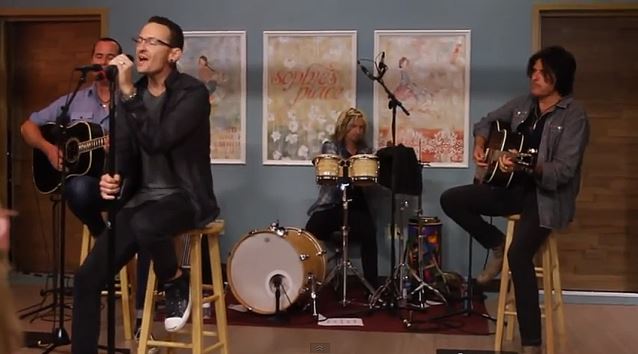 Terrie Carr of WDHA-FM 105.5 FM, the rock music station licensed to Dover and Morristown, New Jersey, recently conducted an interview with STONE TEMPLE PILOTS guitarist Dean DeLeo and drummer Eric Kretz. You can now listen to the chat in two parts below.

DeLeo: "He's such a trooper that way, man, 'cause he's in a lot of pain. He's not expressing the pain or the grouchiness to us; it's pretty incredible! I mean, he was singing some vocals last night, and sounding fantastic. He's got his leg up, and he's recuperating fast. But he's working out every morning — not on his leg, but on other parts of parts of his body."

Kretz: "You can just see he's a quick healer. The guy is just really, really fit. He's going to be well recuperated by time we get on the road next month."

Kretz: "Chester's really stepping up on this, and we are, too. We're four songs in, and then we're gonna go on this run in April and then continue recording as well. So we should have a full-length album out by the end of the year."

DeLeo: "When the four of us get together and we're passing around ideas and [we're] kinda real eager to bring [our] new material to the table, it's an interesting time, because [we're] very vulnerable. You really have to leave the ego at the door and be prepared for someone to say, 'I don't know if I absolutely love that or love that part.' And it's about everybody really felling it and really being happy. And for the most part, it does go that way… And, you know, for me, getting to share my songs or my music with Eric, Robert [DeLeo, bass] and Chester, I've got the best of the best."

STONE TEMPLE PILOTS' first studio project with Bennington on vocals was an EP called "High Rise" that was released in October 2013.

Bennington replaced original singer Scott Weiland in the lineup in May of that year.

STP will head out on the road this spring as well for its first new tour dates since late 2013. The trek kicks off on April 8 in Seattle, winding down on April 30 in Philadelphia.

One dollar per ticket on the new tour will be donated to Music For Relief, a nonprofit organization dedicated to disaster relief and environmental protection that was launched in 2004 by LINKIN PARK.