STRYPER will return to the road in May for the 2019 "History Tour - Greatest Hits & Covers That Influenced Our Generation". The trek comes on the heels of the band's yearlong "God Damn Evil" world tour, which concluded in Japan in February.

"The music of our generation was and is timeless," says STRYPER frontman Michael Sweet. "It was all about the song and musicians who inspired you to want to play. We grew up on bands like VAN HALEN, JUDAS PRIEST, IRON MAIDEN, BLACK SABBATH, JOURNEY and BOSTON. We wouldn't be here if it wasn't for the music of these legendary bands. We thought it would be an amazing experience to play some of these songs live and show you, the audience, exactly were our roots lie. We'll also be incorporating our own hits and videos from 1984 to 2019, and something from Perry's past as well (FIREHOUSE). We’re excited to get back out on the road and we look forward to seeing you soon!”

Formed 36 years ago, STRYPER is the first overtly Christian metal band to go mainstream. The group's name comes from Isaiah 53:5, which states: "But he was wounded for our transgressions, he was bruised for our iniquities: the chastisement of our peace was upon him; and with his stripes we are healed."

The follow-up to 2015's "Fallen", "God Damn Evil" marked STRYPER's first effort since the addition of former FIREHOUSE bassist Perry Richardson. Perry joined the band as the replacement for STRYPER's longtime bassist Tim Gaines, who was fired from the group in 2017. 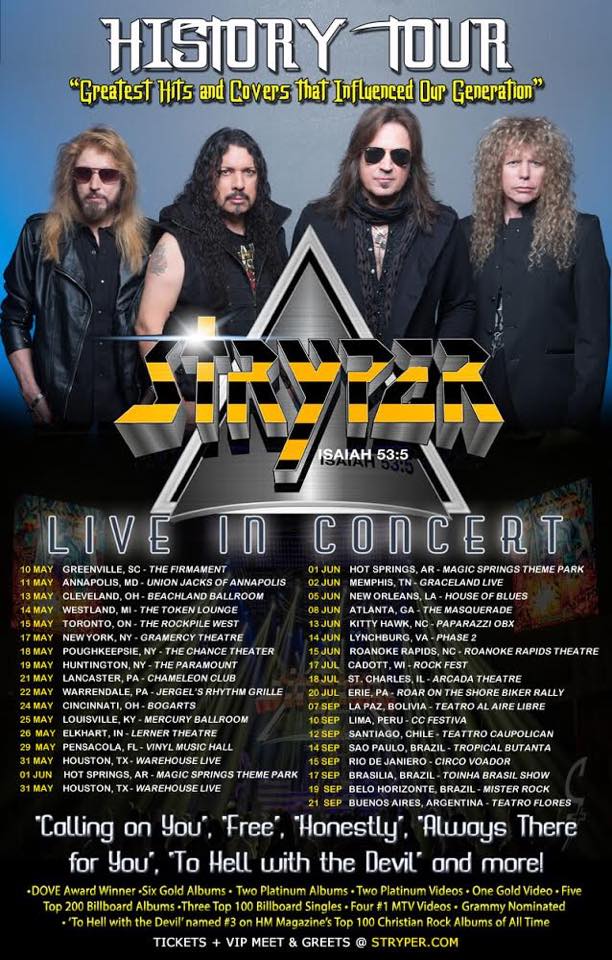