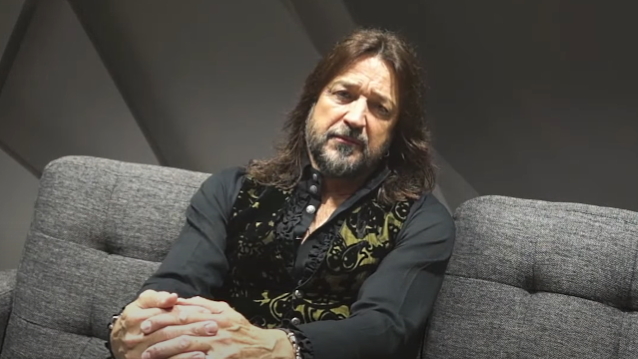 Michael Sweet of openly Christian rockers STRYPER says that he doesn't care if he loses social media followers over his comments on abortion rights, explaining that "it's not about following me, it's about following Christ."

On Thursday (December 2),Sweet, who has fronted STRYPER for nearly four decades, shared a video of protesters allegedly taking abortion pills (mifepristone) near the U.S. Supreme Court building to protest to a court challenge that could reverse Roe vs. Wade. None of the protesters were pregnant, said Amelia Bonow, co-founder of the abortion rights group Shout Your Abortion, who orchestrated the demonstration. In an accompanying message, Michael wrote: "When women are shamelessly and proudly taking 'abortion pills' on video with smiles on their faces, isn't that a whole new level of evil? How and why is this acceptable in our world? Are we really this far gone? Celebrating the death of the unborn!!"

Sweet's comments were predictably met with a large amount of disdain from pro-choice advocates who have condemned a Mississippi law that bans abortions after 15 weeks. But the 58-year-old guitarist/vocalist has refused to back down, returning to his social media earlier today to share a follow-up post in which he explained his stance in greater detail.

He wrote: "Yesterday I posted a video showing 3 women taking 'abortion pills' and the flood gates opened. As they should. It's about as serious a topic as there ever could be.

"First, I'm pro-life. If you didn't know that by now then I truly have no words to explain that. Second, as much as I take issue with pro-choice - my anger came from seeing the joy and the smiles on the faces of the 3 women taking the pill. Without going into details, I know women who have had abortions and it was the most traumatizing event that took place in their lives. Still is. There was no joy, there were no smiles. Only pain. That's the issue I had with that disgusting video. They were taking the pills (whether they were real pills or not) with a smile, as if it were a party and a fun thing to do. With little kids watching and soaking it it all in. Everyone should take issue with the presentation. I know the issues at hand will have many different opinions but the way that was presented should rub everyone the wrong way. Tasteless and classless.

"I will NEVER stand by and be silent when I see something so disturbing and yes - EVIL!" he added.

"To those who turned it around and use the 'my body, my choice' cliche - do you really think that this behavior is okay? If so, then we're in worse shape than I thought.

"Anyway, I have absolutely no regrets for my post and I wouldn't change a thing. I may lose some followers but that's okay. It's not about following me, it's about following Christ".