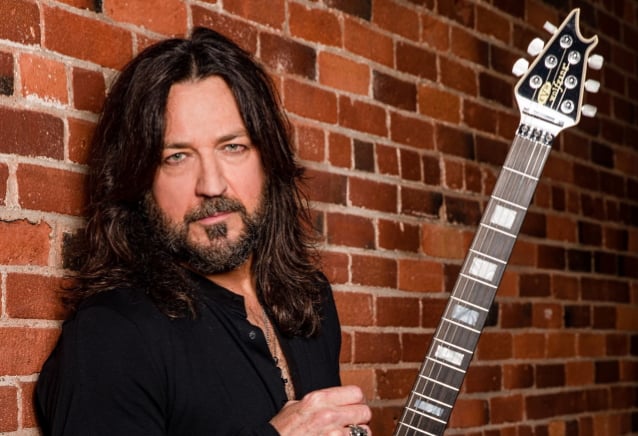 Michael Sweet of openly Christian rockers STRYPER has shared a list of some of his New Year's resolutions, including that he wants "to pray & play harder" and "to ban CNN" from his life.

The 57-year-old Massachusetts resident posted his list on social media on Thursday (December 31),writing: "Here are a few of my 2021 New Years Resolutions:

Two months ago, Sweet defended his support of Donald Trump, saying that the real estate mogul "has done a lot of good things for America."

Despite the fact that he is twice divorced and has faced over two dozen accusations of sexual misconduct, Trump was white Christians' preferred candidate for last year's presidential election, with some insisting that the president is a Christian hero who is standing up for religious rights.

Asked in a recent interview with Slabber.net why he voted for Trump in 2016 and why he believes Trump is a Christian, Sweet said: "I have put it out there already that I voted for Donald Trump four years ago. I voted for him because I had really become fed up with politicians. I feel like most, if not all, politicians are there to tell us what we want to hear so they can get into office, and once they get there they don't deliver. So, when Donald Trump came around, I thought, okay, this guy is not a politician and he's going to be different, and that's why I voted for him.

"I don't think his delivery is often good," Sweet continued. "I wish he would stay off Twitter. The way he presents himself, the way he speaks, and some of the things he says get under my skin as much as anyone else. But I do feel Donald Trump has done a lot of good things for America, especially for the economy.

"I think it's very easy to blame someone for the economy tanking due to a pandemic that's not their fault. This pandemic would have come along regardless of who the president is, and the economy would have tanked regardless. No president in the world could stop the coronavirus coming but Donald Trump has been easy to blame. I don't feel that is justifiable and I feel that it's wrong.

"Joe Biden is an example of someone using Trump and this virus to suit his agenda of getting into office," Michael added.

"There's a lot of people out there who don't like their boss, but their boss is in the that position because they do a good job for the company they work for. That's kind of how I view Donald Trump. I don't love everything he says or does, but I voted for him. But by saying all of that, and being Michael Sweet of STRYPER, that opens the door for me to be attacked. I'm okay with that. I'm not gonna run from what I do or say. I'm not afraid to be challenged for my decisions."

Back in November 2016, Sweet drew criticism from some STRYPER fans for posting a picture of Donald Trump and congratulating the real estate mogul for "working his ass off for the presidency of the United States of America."

In March 2019, Sweet praised Trump's actions that served to ramp up the federal government's response to the COVID-19 epidemic — even after Trump was criticized by some parts of the media for downplaying fears about COVID-19 or actively spreading misinformation about its repercussions.

Last May, Sweet said that he would like to see his band represented by Trump's fourth White House press secretary, Kayleigh McEnany.

In October, Sweet praised Amy Coney Barrett, who narrowly won confirmation to fill the vacancy left by the death in September of liberal Justice Ruth Bader Ginsburg, for answering questions during confirmation hearings "with poise, grace, patience, humility and intelligence."

Barrett has close ties to People Of Praise, a charismatic Christian religious group which has conservative stances on the role of women in society and other social issues. Former members of the group say it teaches that wives must submit to the will of their husbands.

Hey @blabbermouth - you’ve really got a thing for me don’t you? 😉 You rarely post about my musical accomplishments yet you stalk my social sites to twist and turn what was meant to be a funny post into “click bait” for your starving bottom feeders. 2020 still owns you💩 https://t.co/RR4aOsE079

Here are a few of my 2021 New Years Resolutions: