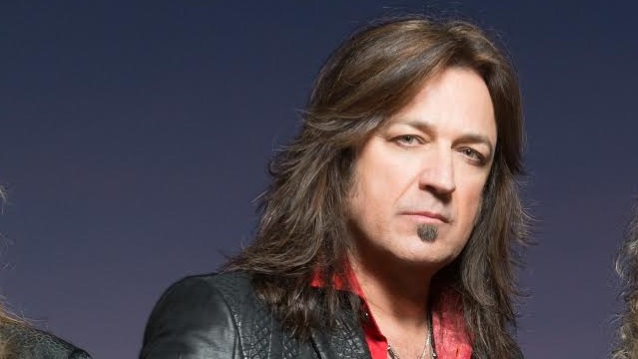 STRYPER Frontman On 'Keyboard Warriors': 'Half Of The Clowns That Make Comments About Me Wouldn't Dare Say It To My Face'

STRYPER frontman Michael Sweet spoke to Rock Confidential about the negative effects of social media, particularly as it relates to bullying, name calling, and sometimes a complete lack of respect for others.

"People are easily offended by honesty," he said. "There's a fine line between honesty and hatred. Some people go online if we or another band posts a new video and just start attacking it. If they hate it, why are they there? Why say anything? That's not honesty to me. That's the society we live in, where everybody feels like they have the right to speak their mind and most of the time it's just nasty stuff. If someone does it tastefully and isn't disrespectful by being honest, we should all learn to accept that and respect that."

Sweet, who drew criticism from some STRYPER fans in November 2016 for posting a picture of Donald Trump and congratulating the real estate mogul for "working his ass off for the presidency of the United States of America," continued: "It's really sad if you say you voted for somebody and you get attacked for it. Just let people live and have their choices and have their own opinions. Debate respectfully, but you don't see that too often online."

Michael went on to say that face-to-face conversations with some of his online detractors would be a lot different than the exchanges that take place on social media.

"Half of the clowns that make comments about me wouldn't dare say it to my face," he said. "I'd take 'em down. I'm not a violent guy by no means, but some of the things that have been said… I'm sure many other people feel the same. You've just gotta laugh it off. The 'keyboard warrior' mentality — sitting behind a keyboard saying whatever they want. If they were in front of the person saying it to their face, I'm guessing they probably wouldn't say it."

STRYPER's new album, "God Damn Evil", will be released on April 20 via Frontiers Music Srl. The follow-up to 2015's "Fallen" marks the band's first effort since the addition of former FIREHOUSE bassist Perry Richardson. Perry joined the group as the replacement for STRYPER's longtime bassist Tim Gaines, who was fired from the band last year.