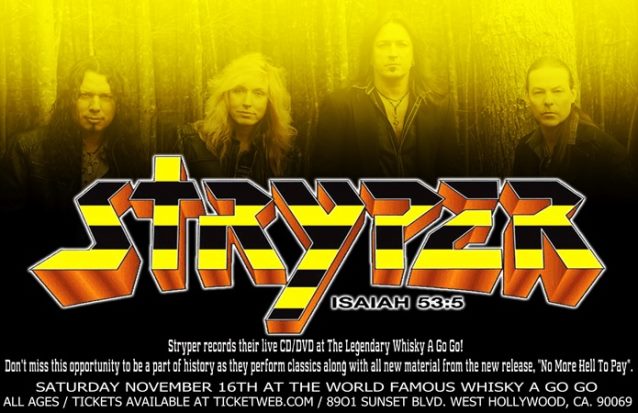 STRYPER: Whisky A Go Go Concert To Be Filmed/Recorded For Upcoming CD, DVD

STRYPER's November 16 concert at Whisky A Go Go in West Hollywood, California will be filmed a for a forthcoming CD/DVD. Tickets for the show can be purchased at Ticketweb.com.

STRYPER's new album, "No More Hell To Pay", will be released on November 5 in North America via Frontiers Records. The effort will be made available in two formats — standard CD and deluxe digipak featuring exclusive video content. Produced by Michael Sweet himself, the set features some of STRYPER's strongest and heaviest material ever.

Regarding the musical direction of STRYPER's new material, Michael Sweet told Screamer Magazine: "The song 'God', which is on 'The Covering'; if you took that song along with 'Bleeding From Inside Out' and 'Blackened' [from 'Second Coming'], and you put it on the same album, that's a pretty good indication of where we are going and where we are at right now. But at the same time this album is all its own."

He added: "Every song has a hooky guitar riff. Everything is in minor keys, so it's a little darker sounding and a little tougher. It's definitely our heaviest record and I think people will be pleasantly surprised.

"The people who do like the poppier side of STRYPER, like 'Calling On You' and 'Holding On', this record isn't going to really give them that. There are a lot of vocal hooks and melodies going on, but it's a little darker, and a little edgier. To reference, there is less songs like 'Calling On You' and more songs like 'To Hell With The Devil'. It's more in that vein than the poppier vein."