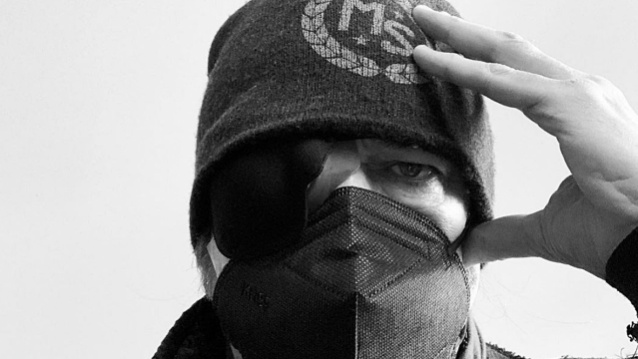 The 58-year-old guitarist/vocalist, who had his initial procedure in November, took to his Instagram earlier today (Tuesday, January 11) to write: "So this just happened. I made it through 7 weeks without incident and then I began to see a slight shadow again in my eye. Went to the eye doctor and confirming my gut feeling, my retina re-detached.

"I just got out of surgery and they removed scar tissue and injected an oil bubble that will stay in longer (3 months). They removed my cataract at the same time and when they remove the oil in 3 months, they'll replace my lens. I should be able to see fairly well at that time.

"I'm face down again up to the day the guys come out to record the new @Stryper album (1/25). I'll be writing lyrics as I remain face down for the next few weeks.

"The show must go on. I believe that this is the time to do the album. So, it's happening. Also, I can't wait to get through this and get out there and start touring in May.

"I deeply appreciate those who have stood by my side and who have continued to pray for and think of me."

Michael's latest medical procedure comes nearly a year after STRYPER guitarist Oz Fox underwent the first of his brain surgeries to treat one of the tumors that were found in his head four years ago. As a result, Oz has been sitting out some of the band's recent tour dates and was temporarily replaced by Howie Simon (JEFF SCOTT SOTO, GRAHAM BONNET).

In early August, Oz said that he felt "it would be best" for him to take the rest of the year off from touring "for some solid recovery time" following surgery.

Fox's tumors — one by his ear and the other in the back of his brain — were discovered when he suffered his first seizure in August 2018 while performing with SIN CITY SINNERS at Harrah's in Las Vegas.

In October 2020, Fox was briefly hospitalized after suffering another massive seizure.

Within weeks of Fox's original August 2018 seizure, STRYPER toured Australia and Japan as a three-piece, and later recruited Simon to fill in while Fox was unable to go on the road.