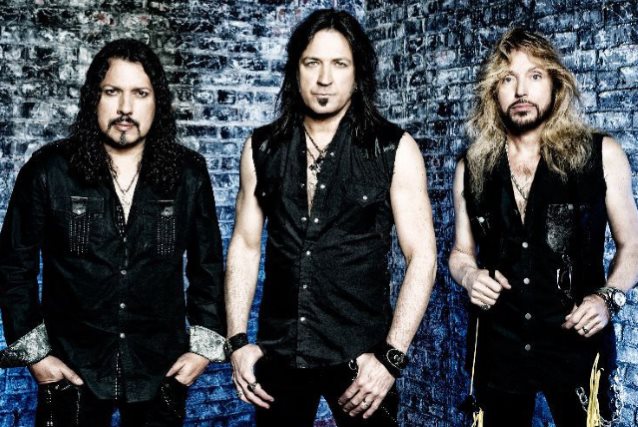 STRYPER will return to SpiritHouse Recording Studios in Northampton, Massachusetts on January 10 to begin mixing its new album for a tentative April release via Frontiers Music Srl. The follow-up to 2015's "Fallen", which will be mastered on January 15, will mark STRYPER's first effort since the addition of former FIREHOUSE bassist Perry Richardson. Perry joined the band as the replacement for STRYPER's longtime bassist Tim Gaines, who was fired from the group earlier this year.

"As much as I respect the past and the music of the past, I think if I wasn't a member of STRYPER and I was a fan listening and watching, I'd like the new stuff equally as much as the old stuff, maybe even more.

"As I finish singing over the next week I'm really excited as I hear these songs and know that soon enough, you'll will be hearing them too.

"The tracks are killer!!!!" Sweet adds. "Tight, punchy, groovy and memorable. Everyone did an outstanding job on this album. Oz [Fox] is working on his guitar solos at his home and I'm working on mine here at my studio.

"We're so humbled and honored to still be able to do this and we hope that you all are ready. This one is really special."

Sweet recently told ListenIowa that both the title and the lyrics of the title track of STRYPER's new album will be "shocking" to STRYPER fans — "moreso than with 'To Hell With The Devil'. When people hear it, they're going to go, 'What? Can you tell me that again?'" he said. "A lot of the lyrics on the album have been kind of therapeutic, coming from the last two or three years." As for the music, he described it as "straight-up STRYPER and a little AC/DC and a little [JUDAS] PRIEST in a blender… It's an anthem with a straight-ahead, memorable, sing-along chorus, and people will be like, 'Yes!'"