The long wait is finally over for STYX and COLLECTIVE SOUL fans, as both bands are rested, healthy and ready to hit the road for their first-ever multiple city tour together.

Said STYX's Tommy Shaw: "Hello friends. Man, have we missed you all! We are thrilled by the news that STYX will be hitting the road with our friends COLLECTIVE SOUL. After all this time off, (whew!) and now to get together with this masterful band of storytelling troubadours, we can't wait to see you all again live and in person, performing an evening of music we love. See you soon!!!"

Added COLLECTIVE SOUL's Ed Roland: "Not only is it great to get back to live music and see our fans, family, and friends; but to experience it with a great band like STYX, IT'S AWESOME! Let's Rock!"

STYX — James "JY" Young (lead vocals, guitars),Tommy Shaw (lead vocals, guitars),Chuck Panozzo (bass, vocals),Todd Sucherman (drums, percussion),Lawrence Gowan (lead vocals, keyboards) and Ricky Phillips (bass, guitar, vocals) — had previously announced their return to Las Vegas with a two-night engagement at The Venetian Theatre inside The Venetian Resort Las Vegas on September 25 and September 26, which will include an exclusive set list and brand-new stage production. Today, due to popular demand because the first two shows quickly sold-out, a third date has been added on September 24. Tickets for the newly added show will go on sale to the general public Friday, April 23 at 10 a.m. PT. STYX fan club members will have access to a pre-sale beginning Wednesday, April 21 at 10 a.m. PT, while the Venetian's Grazie Rewards club members and Live Nation customers will receive access to a pre-sale beginning Thursday, April 22 at 10 a.m. PT.

After 14 years, STYX's 16th studio album, "The Mission", was released June 16, 2017 on the band's label, Alpha Dog 2T/UMe. The highly anticipated two-disc reissue of "The Mission" was released on July 27, 2018 via Alpha Dog 2T/UMe, which includes a CD of the original album, as well as a Blu-ray of the album mixed in 5.1 Surround Sound accompanied by stunning visualizations for each of the album's 14 songs based on the album artwork. It originally debuted on various Billboard charts, including: #6 Top Rock Albums, #11 Physical Albums, #11 Vinyl Albums, #13 Current Albums, #14 Billboard Top Albums, #16 Retail, #17 Mass Merch/Non-Traditional, #29 Digital Albums, and #45 Billboard 200 (includes catalog and streaming).

COLLECTIVE SOUL's tenth studio album, "Blood", was released June 21, 2019 on Fuzze-Flex Records/ADA. Upon its release, the critically acclaimed album garnered impressive debuts on various Billboard's charts thanks to devoted fans whose support continues to help the band celebrate their 25th anniversary, including #3 on Alternative Albums, #4 on Independent Albums, #5 on Rock Albums, #12 on Digital Albums, #15 on Top Current Albums, and #19 on Internet Albums. 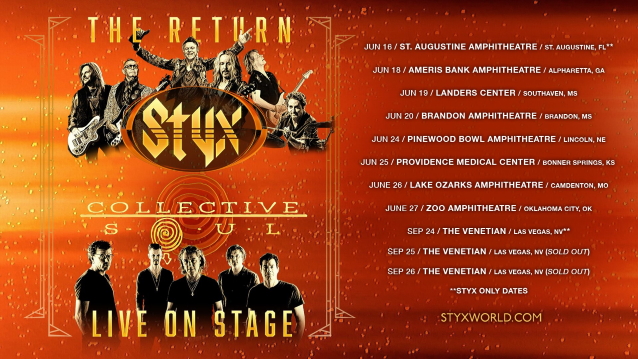