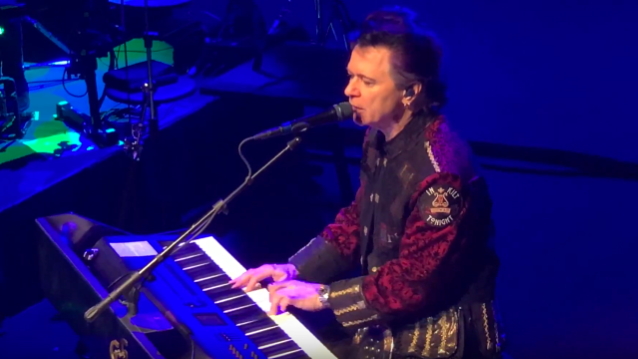 Lawrence Gowan performed RUSH's "Limelight" as a tribute to RUSH drummer Neil Peart during STYX's concert Friday night (January 10) at Celebrity Theatre in Phoenix, Arizona. Fan-filmed video footage of his rendition can be seen below.

After the 90-second tribute, the Canadian-born Gowan told the audience: "Thank you to one of the greatest drummers and certainly one of the all-time greatest lyricists, Neil Peart."

STYX drummer Todd Sucherman shared video of Gowan's performance and added the following message: "'Limelight' was played by Lawrence Gowan before 'Come Sail Away' last night in the round at the Celebrity Theater in Phoenix. I was off stage down a hallway listening to this beautiful tribute. From my vantage point I couldn't see Lawrence (as the stage was spinning). All I could see was my drum kit spinning alone in the center of the stage as this song played, and for me… it was a moment."

Peart passed away on Tuesday (January 7) in Santa Monica, California after a three-year battle with glioblastoma, an aggressive form of brain cancer.

Peart was considered one of the best rock drummers of all time, alongside John Bonham of LED ZEPPELIN; Keith Moon of THE WHO; and Ginger Baker of CREAM.