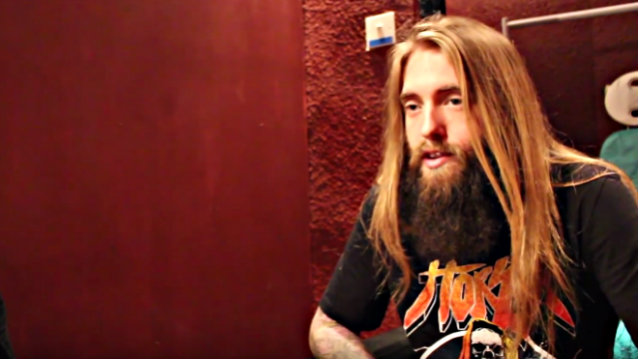 TheMetalTris recently conducted an interview with guitarist Mark Heylmun of California deathcore masters SUICIDE SILENCE. You can now watch the chat below.

Speaking about SUICIDE SILENCE's more experimental songwriting approach on the band's latest, self-titled album, Mark said: "For the most part, I would think that most bands, when you start — and this is just from experience — every band ever I've been in, it's, like, 'All right. You like this band, and you like this band, and I like this band, so let's make a band that sounds like these bands.' And I remember SLIPKNOT, DECAPITATED, CANNIBAL CORPSE and KORN were those bands that we would always throw around when we first started playing. And as the years went on, we would listen to our music and be, like, 'We shouldn't be trying to write songs or music that sounds like other bands. We should just make music the way we wanna make it.' And why even have comparisons to other bands? So with this record, we weren't looking for a sound. We didn't go, 'We know what we want.' It was more, like, 'We're gonna go into this and we have no idea what we're gonna do, and just go in and jam and write music, and whatever comes out comes out.' So the sound was never… we didn't know what it was gonna be. We just knew that we were gonna pretty much try and ignore the fear of people potentially not liking it. 'Cause why? And that's hard for fans to understand."

He continued: "We're in this unique, strange situation of being in a band for as long as we have, and [we were faced with the choice of] either just going through the motions and writing another heavy record where we would always say, 'Let's not do that. Let's not do this. I'd rather do this or people won't like it,' [or saying], 'Why don't we do this shit?' Like, fuck it!

"If more musicians and bands decided to potentially write music that people didn't like, it would probably test their abilities and their all-around approach to writing music. If you write something and people don't like it, you're probably gonna learn more from that than you did if you wrote something where people liked it."

SUICIDE SILENCE's new, self-titled album was released on February 24 via Nuclear Blast Entertainment. The CD was produced by Ross Robinson, who has previously worked with KORN, SLIPKNOT, LIMP BIZKIT and SEPULTURA, among others, and was mixed by Joe Barresi (KYUSS, MELVINS, TOOL, QUEENS OF THE STONE AGE).

SUICIDE SILENCE vocalist Hernan "Eddie" Hermida last month defended the band's decision to explore new musical territory on the group's fifth album, explaining that "if we didn't do this, it would be doing a disservice to the (band) name."

SUICIDE SILENCE has come under fire in recent months following the release the new disc. The controversy over the album's new sound — featuring a more melodic and clean singing style, in the vein of acts like DEFTONES and KORN — even caused one disgruntled fan to launch a petition to stop the record coming out.