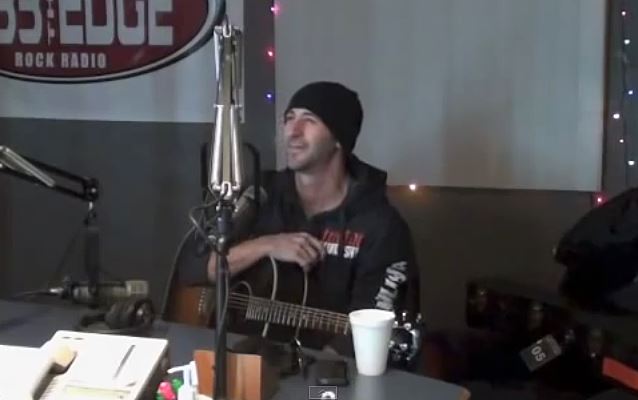 GODSMACK frontman Sully Erna recently took part in an interview and acoustic performance at the studios of WEDG 103.3 The Edge, a radio station in Buffalo, New York, USA. You can now watch video footage of his appearance below. A couple of excerpts follow (transcribed by BLABBERMOUTH.NET).

On what motivates him to play solo shows during breaks from GODSMACK's touring activity:

Sully: "It's a whole different texture for me, it's a whole different emotion from what we do with GODSMACK. [GODSMACK] is so big and loud and fast and strong, and the solo stuff that I've kind of built over the years is a much different emotion, it's a much different attitude. It's a bit more hypnotic and just… I don't know what the word is… vulnerable? And I love playing stripped down. When I'm home a lot, that's what I do; I'll just mess around on an acoustic or play my piano. And a lot of times I just come up with really cool songs that I don't necessarily feel are right for GODSMACK, but they're still beautiful songs, in a sense, and I wanted to make sure I had a home for them. So that's what kind of started this whole snowball effect with doing the solo stuff."

On whether he appreciates not having to deal with the logistics of the GODSMACK tours when he is doing the solo shows:

Sully: "Anything in excess is bad. So it's always nice to step away from some of those things, because it makes you appreciate it a lot more when you go back to it. And I love the guys in GODSMACK. Everyone's doing great, everyone's in good health and getting along great, and we're working hard. And we're gonna be continuing to tour throughout all of 2015. I think we're hitting Australia in February, and then we do the States in April/May, we're gonna do June/July-ish in Europe, and then back in the States probably for a fall run. So we have plenty of work to do with GODSMACK, for sure, on this album [2014's '1000hp']. And in the meantime, there's a month off here, a month off there, so I don't mind running a two- or three-week solo tour and sticking that in too. 'Cause I'd really like to keep this music alive with the audiences as well. It's a completely different audience sometimes."

On the good things he gets out of performing solo shows:

Sully: "Well, peace of mind, for one. I'm not babysitting four other guys, or three other guys. [Laughs] Like I said, there's a lot more that goes into a GODSMACK production, 'cause there's so many different components and there's so many different production aspects of it. It becomes overwhelming at times just to make sure everything fires perfectly, because there's a lot of different elements to that show. But there's a lot of different elements to the solo stuff as well. I seem to be the kind of person that, you know, when I create my art, I also see visuals with it, or I see a show that goes along with it. So it's not just about the music sometimes; it's also about the presentation of the band."

He toured behind the album with a large ensemble that incorporated many of the instruments heard on the record.