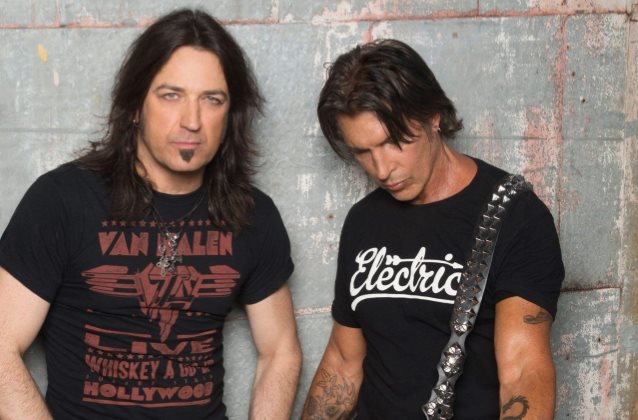 Sweet recently told That Drummer Guy about "Unified": "This album, to me, sounds a little bit more focused. It's a little bit more raw and in your face. The first album was a little more slick, had a little bit more production and effects and things going on and more tracks, too. This album doesn't have as many tracks. It's a little bit more scaled-down and bare bones, but I think it works. I really do. We experimented a little bit more. Like the song 'Walk', George sent me that. I went 'Wow, this is cool. I don't know what to do with it, but it's really cool.' It sounds like if you merged AEROSMITH and QUEEN, STRYPER and DOKKEN together, you're going to get 'Walk'. It's kinda cool."

Regarding the increased diversity of the songs found on "Unified", Sweet said: "That's all you can hope and pray for when you make an album. That people are going to connect with it and they're going to get it. Sometimes it doesn't happen. Sometimes a band makes an album that they feel is the best album of their career and the fans just don't get it. It's happened with us. We made a couple of albums that we were really excited about and they got released and they didn't do so well. It's probably happened with anything. It's really nice to see and hear the band be so excited and the fans and the critics seem to be equally as excited about that album as well. So far, that's the result of this album. I'm hearing a lot of good things. I think it's going to be a winner, man. I do. Granted, we're limited because of the times we live in. Rock isn't at the top of the charts. It's a struggle, it's a battle, it's a fight for bands from our era and for us to go out there and get it out to the masses and do it the right way, it's very tough. But man, we're still trying. We still love what we do. Hopefully that shows."

Speaking about the work put into the creation of "Unified", Michael said: "We were all, our hearts and our souls and our bodies to the core were completely into this album. We put everything we had into this album and gave our all. We all wanted it to be the best. There's no doubt, you're right on the money with that. You know, it's just again, it's hit-or-miss, especially when you start experimenting. When you start trying different things, as an artist, you have to do that and have the freedom to do that. That's what makes some of the best bands in history so good because they took the risk and they experimented and they did something really unique. We tried a little bit of that on this album. Like I said, songs like 'Walk', there's a song called 'Afterlife'. For typical, what people expect to hear from George and Michael, collectively or individually, that ain't it. Those are the songs people are going to listen to and go 'Oh wow, this is different' for them. It really is. We enjoyed doing that. It was a lot of fun."