UK-based modern thrash hopefuls SYLOSIS recently completed the work on their new album, "Conclusion Of An Age", for an October 24 release via Nuclear Blast Records. The CD was recorded at Grindstone Studios with producer Scott Atkins, who is being described by the band as "one of the best producers around."

According to a press release, the album's lyrical theme deals with "the direction in which the planet is heading and the consequences humanity will face. The album covers many areas but the main concept is the idea of mankind destroying itself through war, self-indulgence, religion etc., and how the earth is being ravaged by humanity to the point of being destroyed… but how the earth's might will eventually prevail!"

"Conclusion Of An Age" track listing:

The artwork for the album (see below) was created by Colin Marks of Rain Song Studios who has previously worked with STRAPPING YOUNG LAD, ABORTED and WHITECHAPEL.

SYLOSIS' musical style was described in a previous press release as "brutal, technical and deceptively melodic modern metal that favours invention over cliché and never shies away from nimble shifts in style, tempo or mood. The quintet manage to bring an epic, technical and melodic feel to the old-school thrash sound, combining incredible guitar solos and bloodlust vocals. The outcome, a sound that is both devastatingly feral and blisteringly precise." 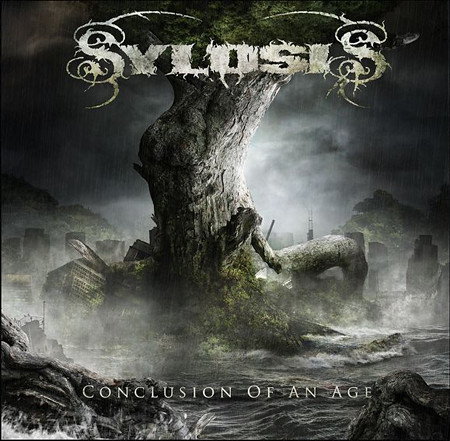