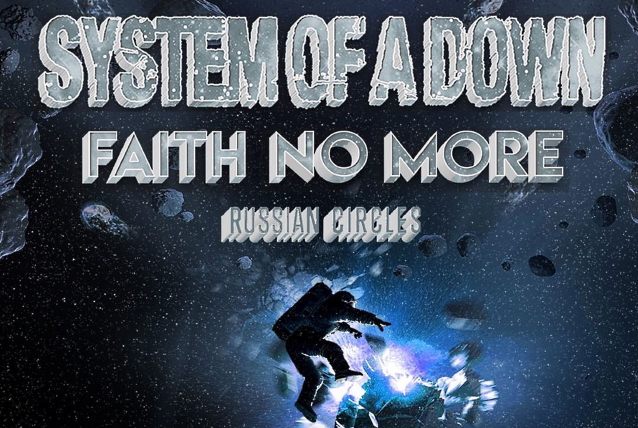 SYSTEM OF A DOWN, FAITH NO MORE and RUSSIAN CIRCLES have announced three West Coast shows prior to their appearances at the Banc Of California Stadium in Los Angeles. They are as follows:

Joining SYSTEM OF A DOWN, FAITH NO MORE and RUSSIAN CIRCLES at Banc Of California on October 22 and October 23 will be KORN and HELMET.

SYSTEM OF A DOWN has toured intermittently since ending its hiatus in 2011, but has only managed to record two songs in the last 16 years, "Protect The Land" and "Genocidal Humanoidz". Released last November, the tracks were motivated by the recently erupted conflict between Artsakh and Azerbaijan, with all proceeds supporting humanitarian efforts in SYSTEM OF A DOWN's ancestral homeland of Armenia. Along with other donations from fans on their social pages, they have raised over $600,000.

FAITH NO MORE initially reunited for touring purposes in 2009, twelve years after issuing its previous studio set, "Album Of The Year", and followed that up with 2015's "Sol Invictus".

In May, FAITH NO MORE moved its scheduled summer 2021 European back to the summer of 2022.

A post shared by System Of A Down (@systemofadown)