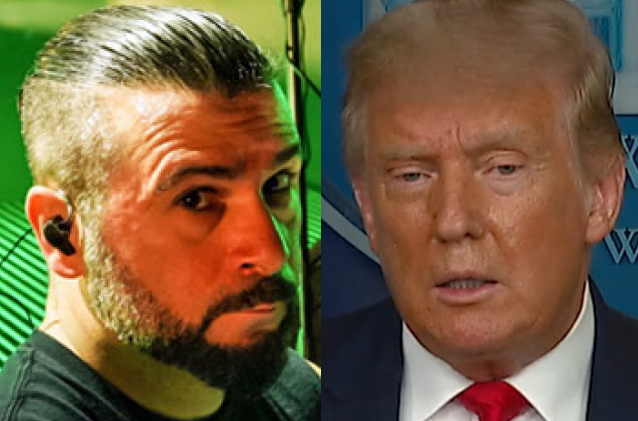 SYSTEM OF A DOWN drummer John Dolmayan was the featured guest on a recent episode of "The Right View With Lara Trump", the podcast hosted by former U.S. president Donald Trump's daughter-in-law Lara Trump.

Dolmayan, who has been outspoken about his support of Trump and dislike of liberals, admitted that his political views have been met with some resistance from some of the SYSTEM OF A DOWN fans.

"I find it really difficult to keep my mouth shut when I see injustice," he said (as transcribed by BLABBERMOUTH.NET). "And I find what's happening to conservatives to be completely opposite with justice, completely opposite with understanding and compassion, where we are being victimized by people that should be there to protect you: news agencies, every social media platform having one thought process; Google having one thought process.

"The question I like to raise to people is at the end of the day, if the richest and biggest corporations think one way, shouldn't you at least research the other way of thinking? Because there are gonna be things that are in their own self-interest. Just because they have an interesting name or an aim you think you can get behind and a slogan doesn't mean that it's a good thing. Look into who the people are that they build these organizations off of and try to look into it a little bit deeper so you gain a little bit of perspective and be open to other people's opinions.

"Look, I've done myself no service," Dolmayan admitted. "I took a lot of flak, I lost a lot of followers, I lost financial opportunities, and primarily because I supported Donald Trump as president. 'Cause he was my president — I voted for him twice, and I'm not ashamed to say it. I'd vote for him again. I will vote for him again if he runs. I hope he does. I hope he does; you have my support. And the reason why is because I think he's doing things for the right reasons."

After Dolmayan noted that "there are very different opinions" within SYSTEM OF A DOWN, particularly when it comes to him and singer Serj Tankian (who also happens to be his brother-in-law),Lara Trump asked him what the initial reaction was from his bandmates when he voiced his support for Donald Trump.

"I did get advice from a few of my bandmembers and my manager and my wife especially that was, like, 'Look, maybe it's not the best idea to put all these views out there,'" Dolmayan said. "And my answer to them was, I supported my singer in everything he's ever said, although I didn't always agree with everything he's ever said, and I just want the same respect back now. I'm not saying that he shouldn't have a right to his opinions. What I'm saying is there are kids in schools, and they are young; they are impressionable. And there are kids that think the way I think, and they are alone for the most part because the opinion is swayed the other way. Teachers are swayed the other way — your educators, the people around you. You're indoctrinated from a very young age in this country at this point right now — what we're dealing with right now, today. And who's speaking for those kids who are sitting there feeling like they're wrong but they can't help the way they think? Who are they looking at and saying, 'That person agrees with me at least.' I may not reach all of 'em, but if I reach a few of 'em, then that's enough for me. And if that means I have to make a little bit less money, then so be it. My family isn't starving; we're doing just fine. If that means I'm gonna have less opportunities, so be it.

"It's hard to take a stand," John continued. "Most people are just trying to earn a living, take care of their families, give their kids a little bit of a better life than they had, and that's their focus — trying to stay on top of credit card bills and their mortgage and rent, or whatever it is.

Dolmayan has repeatedly defended America's 45th president, saying that Trump opponents "perpetuated and instigated a total shutdown of the economy" in the hopes that it would crash and that he would be blamed. Dolmayan also praised Trump and accused Democrats of "demonizing" the former president and "blaming him for everything under the sun." In addition, John called Democrats "the true bigots" who "fought to maintain slavery" and were "directly responsible for 70 plus million abortions, a large majority of whom were black." Dolmayan also supported Trump's claim that his administration had done more for the African-American community "than any president since Abraham Lincoln."

In an October 2020 interview with Forbes, Serj admitted that he found it "frustrating" to see John so publicly supporting Donald Trump.

"He's Armenian. He's my brother-in-law and my drummer. Is it frustrating being politically opposite to your own drummer and brother-in-law? Fuck yeah," he said. "Of course it's frustrating. But that's having to do with American politics. When it comes to Armenian issues, we're on the same exact page."

Four months earlier, Serj reassured fans that, despite their differing beliefs when it comes to Trump, he both loves and respects John "irrespective of our extremely polarized political commentary.

"Remember irrespective of the stance, only artists that truly care and are impassioned will risk alienating their base for what they consider the truth," he added. "Our dilemma and possible fallacy is that we have two in one band. Some may consider that a weakness but the artistic, political and social dichotomy if not quadrichotomy has made SYSTEM OF A DOWN what it is today."

That same month, John stated about the discussions he has had with the other members of SYSTEM OF A DOWN: "You'd be surprised at how civil our conversations are, especially between me and Serj, who seem to have the most diverging opinions on things.

"I have a lot of respect for Serj and his opinions, although I don't agree with them very often these days. And that's okay. We expand each other's horizons. I like to think that he learns from me and I learn from him."

During Trump's final year in office, Tankian called for the then-president to resign and described him as "completely useless" over his handling of the coronavirus outbreak.