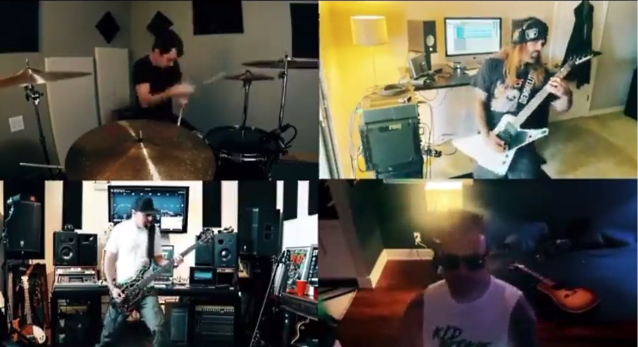 Christopher shared a video of the performance on his Instagram and wrote in an accompanying message: "I hope you enjoy watching this as much as we enjoyed making it.

"I would like to thank the homeys: @jayruston For taking time out of his busy schedule to do this sweet mix, @rarebirdlit for the studio, @dirtyern12 for making this rad video, and @ra_diaz for the company. And my brothers in arms: @phildemmel @shavoodadjian @brandonpertzborn . I love you guys so much and thank you for absolutely crushing this!! I hope we did @stpband justice".

Hired gun Christopher has spent his musical career as an unsung hero, playing an important live role for many influential bands and artists who need a bassist or guitarist.

Jason's a left-handed guitarist who plays a regular guitar upside down and back to front. Not being able to afford a left-handed model in his teenage years, it's testament to his tenacity that he made do, "figuring it out for himself." Not only a gifted musician, Jason has turned his hand to writing about his life and experiences of "making it" in the industry. In 2018, he released the first instalment of his engaging work, "The Rogue To Nowhere", part one of a three-part novella series documenting tales of growing up in Woodstock, New York and moving to Los Angeles, California in search of his musical dream.